This business of winning state is becoming old hat for the Judson girls track and field team.

Needing to finish at least third in the 1,600-meter relay, the final event of the meet, to win back-to-back state titles, the Rockets put an exclamation point on their repeat as champions in the UIL’s largest classification by taking the gold medal in the race Saturday night at Myers Stadium in Austin.

Judson was in third place heading into the final leg of the 1,600 relay, but anchor Mariah Kuykendall took the lead about midway through the race and never relinquished it.

“I knew that if we finished third, we would win state, but I wasn’t going to settle for third,” Kuykendall, a junior, said Sunday. “I wanted to get first in the 4×400 so bad. I wanted to win for the rest of the girls on our team, especially our seniors.

“There was a lot of pressure on us this year. Everybody expected us to win state. We didn’t want to put too much pressure ourselves. We just wanted to do our best, no matter what happened.”

Kuykendall started Judson’s 1,600 relay in the Region IV-6A meet two weeks ago, but was moved to the anchor leg by Coach Renee Gerbich minutes before Saturday night’s race. Darionne Gibson, Dominique Allen and Zantori Dickerson ran the first three legs, in that order, at the state meet.

“There was a lot of pressure at first because I expected to run the first leg,” Kuykendall said. “We had no idea Coach was going to change it up. Everybody on the relay worked really hard. It takes a team. They helped me get first.”

Judson finished with 60 points, 12 more than runner-up DeSoto, to win the 6A state championship. DeSoto had won three consecutive 5A titles before getting dethroned by the Rockets last year. The University Interscholastic League renumbered all of its classifications after the 2013-14 school year, with 5A becoming 6A, 4A becoming 5A, 3A becoming 4A, etc.

“Last year we scored more points, but I think overall, this is the best team because we were able to win even with (Talajah) Murrell not being her best,” Rockets coach Renee Gerbich said. “We had people who took up the slack. We had the depth to do that.”

Murrell, a senior who has signed with Texas Tech, was hampered by a foot injury most of the season. She finished seventh in the 100 Saturday night after taking the silver medal last year, but still took home silver in the 400-meter relay.

Kuykendall transferred back to Judson in March after attending two Oklahoma high schools since last August. She competed with Judson at last year’s state meet, but moved to Oklahoma to live with her father, who is in the Army.

Judson made history last year when it became the first Greater San Antonio school to win a girls track state title in the UIL’s largest classification. The Rockets have won nine regional championships in 11 seasons under Gerbich.

Judson had another athlete turn in a gold-medal performance Saturday night. Senior Kiana Horton won the 200 with a time of 23.10, breaking the San Antonio-area record of 23.48, set by Marshevet Hooker of Southwest in 2002.

Horton, who has signed with Baylor, also ran on the Rockets’ second-place 400 relay and third-place 800 relay. The 400 relay ran a 45.70, breaking the area record of 45.84 it set earlier this season. Horton and Murrell were joined on the 400 relay by Konstance James and Kiara Pickens. James, Kuykendall, Pickens and Horton, in that order, took the bronze in the 800 relay.

“I still can’t wrap my head around how fast everybody on our team ran last night to make it happen again,” Horton said. “Everybody stayed focused. I know there was a lot of doubt going around. People thought, yeah, they won last year, but can they win two times in a row? We proved everybody wrong.”

Gerbich gathered her team before the 1,600 relay to explain what Judson had to do to win the team title.

“The meet didn’t go quite according to plan,” Gerbich said. “We were kind of thinking we should win that 4×200 relay, so now we’re at a point where there’s a little pressure on us. We had a team meeting and it was my gut feeling that we would have the most confidence letting Mariah the stick on the last leg.”

Horton was asked how it felt to watch the 1,600 relay with the state title on the line.

“It was pretty nerve wracking,” Horton said. “We knew we had to cheer on our team and trust that they were going to go out there and do what they had to do. When I saw Mariah after the race, I just hugged her because it was so emotional that I couldn’t say anything. I was so proud of her and the other girls on the 1,600 relay.”

New Braunfels Canyon took third in the 6A boys division, finishing with 30 points. Alex Rogers won gold medals in the 3,200 and 1,600, and Sam Worley finished third in both events. 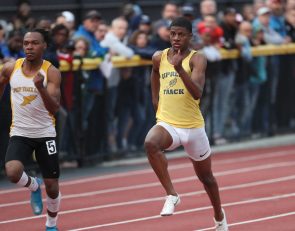 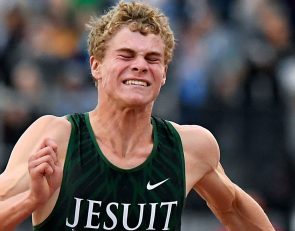 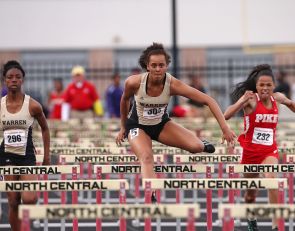