Katie Perkins, a recent graduate from Desert Hills High School, leaves as one of the most decorated golfers in school history.

After another incredible year filled with shots that left the crowd in awe and in disbelief — her eagle from 120 yards out during the first day of the 3A championship — the highlight of her high school career will undoubtedly be the memories with her teammates and coaches that she’s had over the last four years.

“I’m going to miss a lot of things,” Perkins said choking up. “The things I am going to miss the most are the road trips with my amazing teammates and coaches who have been so good to me. I’ve been able to accomplish a lot because of them and I am really going to miss them.”

Perkins, a Utah Valley University commit, will be headed to Orem in three weeks to start school as she prepares for her next chapter in life as a Wolverine.

“I have a lot of family up there so it will be a lot of fun to see them,” Perkins said. “The only thing that I’m worried about is adjusting to the college life. It will be the first time that I’ve left home, so that will be interesting.”

“With Katie up north, I’ll be spending a lot of time with the grandkids now,” she quipped. “Luckily UVU has a couple of tournaments in Utah, with one in St. George, so we’ll still get to see her, just not as much as we’re used to.”

Katie Perkins tied a Desert Hills record with her 4-under par performance at Sunbrook Golf Club May 5, 2015.

While Perkins is excited to get to work, she won’t be able to practice officially with the team until August, but is already looking forward to it.

“I’ve grown up with a couple of the girls on the team and I was able to meet most of the team last year, so I’m excited to play with them,” Perkins said. “The coaches already have everything in place for me when I get up there, so I will be able to practice on all of the courses in preparation for the upcoming season. Nothing like free golf,” she said laughing.

After coming up one-shot short of the individual title during her freshman year, Perkins used that as motivation to get better each year and has certainly done that with three state individual titles.

With a target on her back, the pressure still hasn’t been able to get to Perkins, who calmly drained the biggest putt of her life on the 18th hole at Bloomington Country Club, forcing a playoff during the recent 3A championship in May.

After a terrific senior season, Desert Hills’ Katie Perkins will take her talents to Utah Valley University as she inches closer towards her dream of playing professionally.

That example is one of many qualities that teammate and senior-to-be Kyla Smith looks to develop this upcoming season.

“I strive to be like her,” Smith said. “If I could someday perform like she does, I would be set. She has the skills, a great attitude and is a great team leader.”

“Katie’s unbelievable,” Dyer said after witnessing her second eagle of the season. “She’s always focused and is so strong mentally. She’s been a wonderful leader for us and we are really going to miss her.”

With her goal to play professionally one day, Perkins is now one step closer to fulfilling her dream.

Wonder Woman: Brielle Atkin lifts herself to the top

Led Desert Hills to its sixth consecutive 3A team championship 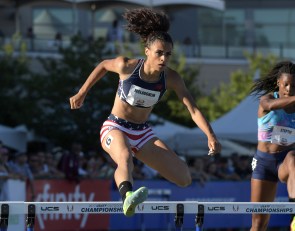 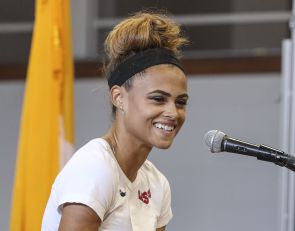 Who is the most dominant high school athlete since LeBron?