COLUMBUS – The Lakota West girls’ basketball team will play for the state championship on Saturday night.

But, getting there wasn’t easy.

Wells was one of three Lakota West players with 11 points on Friday night. She made a 3-point play and two key free throws down the stretch to help lift the Firebirds.

Friday marked the third state Final Four appearance overall for the Firebirds, which reached Columbus in 2009 and 2008 (state runner-up).

The Firebirds broke the school record for most wins in a season (27) that was previously set in 2007-08.

On Friday night with the season hanging in the balance and Newark with momentum in the second half, the Firebirds not only rallied together on the scoreboard but with their injured teammate.

The Firebirds trailed 40-39 early in the fourth quarter before senior forward Arianne Whitaker’s feet went out beneath her and a player inadvertently hit her head while going to or on the floor. She was on the floor being attended by medical personnel for about 10 minutes under the Newark basket.

Whitaker was carried off by a stretcher after about a 10-minute delay in the game with 6:18 left. Fishman said Whitaker was responsive and he was hopeful she would be with the team Saturday – but possibly not in a playing capacity.

Fishman said he tried to assure his team in the fourth quarter that he believed Whitaker wasn’t in a serious situation.

“I’ve never been so proud of a group of girls to see a teammate and friend go off on a stretcher I was just worried about their minds and their hearts at that point. I tried to prepare them,” Fishman said.

Whitaker was evaluated at an area hospital Friday night, but no other details were available.

“When Air went down we all looked at each other and we collected ourselves. We talked about it,” Lakota West freshman guard/forward Abby Prohaska said.
“We knew we had to finish it for Air.”

Prohaska had 11 points, five rebounds and two steals for the Firebirds. Prohaska scored the Firebirds’ first basket after the game resumed to close the gap to 42-39. Then, she made a 3-pointer to tie the game at 44 with 4:34 left.

Wells had 11 points and three assists. Her 3-point play with 3:02 left gave Lakota West a 4-point lead at 48-44. She made two free throws with 41 seconds left to help seal the game.

Junior forward Lexi Wasan added 11 points and five rebounds for the Firebirds, which held the lead at the end of each quarter Friday night.

Lakota West, ranked No. 9 in the season’s final Associated Press Division I state poll, has won 20 consecutive games since a loss to Alter on Dec. 28.

Newark, ranked No. 3 in the Associated Press state poll, made its first state Final Four appearance in girls’ basketball.

Lakota West fans cheer on the Firebirds during their State Semi-final game against Newark, Friday. 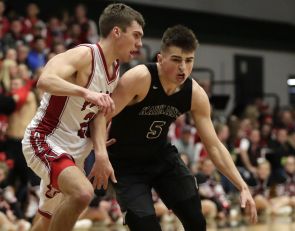 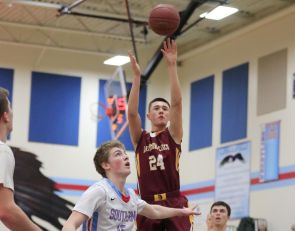 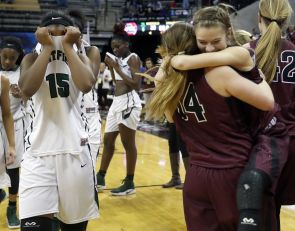