North Caddo’s Robert Williams had a brush with greatness this summer while at a basketball camp in California, when he and two teammates went 3-on-3 against LeBron James and DeMarcus Cousins.

“Every pass from LeBron was like it was shot out of a gun,” Williams told The Times. “It was crazy playing against him. He hooked me one time going to the basket, but I felt like he took it easy on us.”

Williams may have received a lesson in humility from LeBron, but the Texas A&M commit didn’t take it easy on opponents of the Rebels last season and the same will be true this winter. A crafty shot blocker for coach Ron Meikle’s club, Williams has a reach that seems to stretch from sideline to sideline. He’s intimidating in the paint, but the same isn’t true when he visits discount stores in Vivian.

Not so long ago every time Williams walked into Vivian’s Walmart he was asked by a fellow shopper to retrieve something off a top shelf. That happens when you’re 6-foot-8.

But things have changed of late for Williams, who will be a senior at North Caddo this fall and tabs “Jumanji” as his favorite movie. Now whenever he enters Walmart to pick up a bag of chips, youngsters seek him out for an autograph. That happens when you’re the No. 1 rated basketball player in the state by ESPN.

“Everywhere I go I have to take a lot of pictures,” said Williams, who under pressure from North Caddo counselor Angela Channell and school resource officer Rickey Evans to keep his grades where they need to be.

Williams, who prefers Louisiana rapper Kevin Gates and calls “Martin” his favorite television show, enjoyed a growth spurt following his eighth-grade year that has helped generate the hype around his athletic prowess. He zoomed up from 5-foot-9ish to 6-foot-8ish almost overnight.

“It was easy finding clothes that fit but we didn’t buy many of them at a time,” he said chuckling. “Almost as soon as I wore it a couple of times, I outgrew it.”

More and more Williams gets recognized in public and he’s enjoying the attention of being the state’s top basketball recruit. He expanded his attention nationally by playing for the AAU’s Houston Hoops earlier this year. His dad has warned him, however, that being a celebrity will make things tougher when the Rebels’ season begins.

“He told me I was gonna have a bulls-eye on my back. It’s crazy,” he said. “I’ve been hearing from people I’ve never heard from before.”

And Williams said folks at other high schools have been pressuring him to switch schools.

“A lot of people thought I was going to transfer to a school in Texas to be near my dad,” he said. “But I tell everyone that I have no reason to leave North Caddo.”

His two favorite non-basketball past times are swimming and bowling. He didn’t have much time to swim at the Vivian’s neighborhood pool this summer due to his basketball exploits, but during a trip to Las Vegas he find out he has an affinity for bowling.

“I just started about a month ago, but now I’ve been six or seven times. The first time I just did it to be doing it,” he said. “I won the first game I bowled. My arms are so long that it just came to me naturally. It’s a lot of fun.”

Williams isn’t involved in many extracurricular activities at North Caddo, but he is a member of the Ebenezer Baptist Church in Belcher. And groups of folks like that keep him humble even when he’s brushing up against greatness from the NBA. 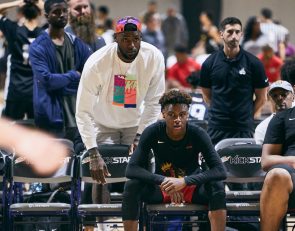