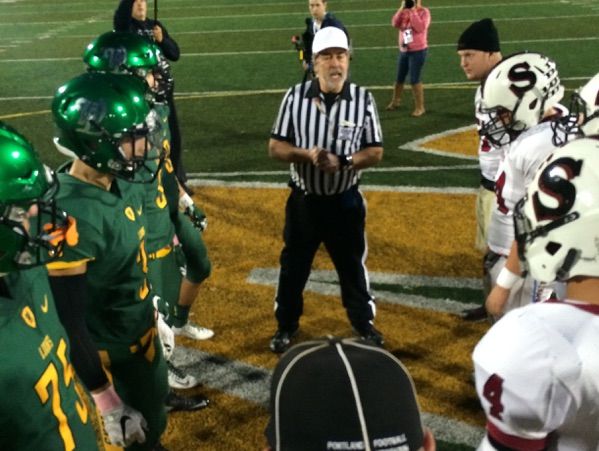 PORTLAND, Ore. — No. 3 West Linn (12-1) reached its first state championship game with a 51-7 thrashing of No. 2 Sherwood (12-1) Saturday afternoon in the OSAA 6A state semifinals at Providence Park.

West Linn takes on Sherwood in an OSAA 6A state semifinal.

A late interception cost the Lions in its regular season matchup against their Three Rivers League foe, which the Bowmen won 39-35. But on Saturday, the Lions were not going to be stopped.

Junior quarterback Tim Tawa continued his state Player of the Year-type season by completing 14 of 18 passes for 309 yards and three touchdowns, all to senior wide receiver Connor Berggren. Bergrren had seven catches for 204 yards.

Tawa got some help from his teammates in the second quarter. Senior running back Kahlil Monson scored the first of his two three-yard touchdown runs to give the Lions a 16-0 lead. West Linn then got an interception from junior defensive back Elijah Molden on the Lions’ 10-yard line.

Any hopes for a miracle comeback were dashed when West Linn defensive back Jaydon Grant picked off Sherwood quarterback Adam Vasquez and returned it 15 yards for a touchdown on the Bowmen’s first drive of the second half.

Monson ran in his second touchdown late in the third quarter to put the Lions on top 44-0.

Sherwood got on the board in the fourth quarter with a two-yard touchdown run by Colton Buchanan. The Bowmen ran for 210 yards on 40 carries, but were held to 17 passing yards.

The Lions would add one last touchdown after a 64-yard run by freshman Dawson Jolley.

West Linn will play in its first state championship on Saturday, Dec. 5, against the winner of No. 4 Sheldon vs. No. 1 Jesuit.