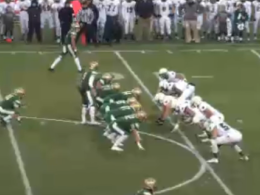 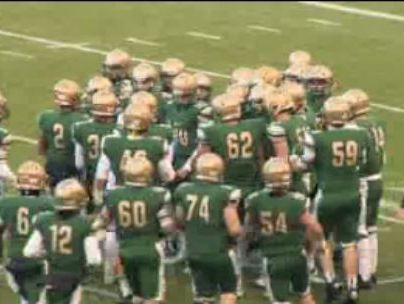 No. 1 Jesuit advanced to the OSAA 6A state championship game with a 34-13 win over Sheldon.

Jesuit knocked off the Irish 61-55 in double overtime during Week 2 of the regular season. The Crusaders rode 6-foot-3, 215-pound running back Jason Talley early and often, and Saturday’s game was never as competitive.

Talley scored on Jesuit’s first possession with an eight-yard TD run to take a 7-0 lead. The senior running back took a 41-yard run to the house to give the Crusaders a 13-0 lead with three minutes left in the first quarter. Talley finished the game with 38 carries for 243 yards and three touchdowns.

Then the Crusaders took advantage of a pair of Sheldon turnovers. David Bridges recovered an Irish fumble to give Jesuit the ball in Sheldon territory. Talley was able to finish off the drive early in the second quarter with a one-yard score to push the lead to 20-0.

Herbert, an Oregon commit, was held to 215 passing yards and one touchdown.

The Irish got on the board after a two-yard touchdown run by Misikei Fuiava-Thomsen to make it 27-7 game at halftime.

Jesuit opened the second half with another scoring drive, capped off by a 20-yard touchdown pass from Restic to Jordan Happle. The Crusaders took a 34-7 lead into the fourth quarter.

Sheldon scored a touchdown on an 18-yard pass to Jackson Johnson, but the Crusaders were able to run out the clock to cap off the win.

The Crusaders have outscored opponents by an average of 56-15 this season.

https://usatodayhss.com/2015/live-blog-no-4-sheldon-vs-no-1-jesuit
Talley leads Jesuit to state final with 34-13 win over Sheldon
I found this story on USA TODAY High School Sports and wanted to share it with you: %link% For more high school stories, stats and videos, visit http://usatodayhss.com.