Mill Creek tops Dacula in #Team11 Game of the Week

Mill Creek tops Dacula in #Team11 Game of the Week 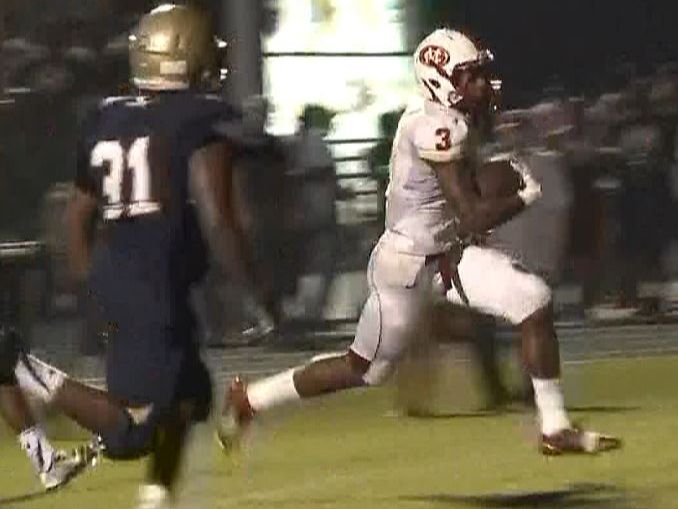 Mill Creek’s Edmond Graham takes the ball into the endzone for a touchdown in the team’s 34-7 win over the Dacula Falcons, Friday, Sept. 5, 2015.

DACULA, Ga. — Mill Creek took home a decisive victory against a storied rival, Friday night, when they took on Dacula.

Dacula had the ball early moving it not quite how they’d planned but enough to move the chains with a pass from Wesley Whitehead to Chase Isler.

But Whitehead had a few chip passes on this drive and eventually one was going to go Mill Creek’s way. And that’s exactly what happens allowing Sidney Otiwu to run an interception to just outside the endzone.

On the first offensive play, Mill Creek’s Daniel Leconte took the ball in for a touchdown. Just like that, with the extra point, it was 7-0.

Then it went back to Dacula and, once again, it was the Whitehead to Isler connection with Isler taking the ball inside the 10 yard line. From there, Jaime Arroyo carried the ball in for a touchdown from two yards out bringing the game to a tie at 7-7.

But the tie didn’t last long with Brenton King toe-bashing the ball through the up-rights for a 10-3 lead just before the halftime buzzer.

Third quarter and that Hawks defense was still very opportunistic with Mill Creek’s Jamar Hall getting his mitts on the ball for an interception in enemy territory.

That left a short field for the offense and room for Joe Thomas to run in an 11 yard touchdown taking quite a few Falcons with him – Mill Creek upping the lead 17-7.

The hawks would add a field goal to the lead and then Cameron Turley would complete a pass to Edmond Graham to put another six points on the board.

Mill Creek’s Hawks ended the night with a 34-7 victory over the Falcons.

Hawks Head Coach Shannon Jarvis had a lot to say about his team after the night’s victory.

“You know our kids were resilient in the fourth quarter – played extremely well – so I’m so proud of our kids and our community for this win,” he said. “It’s a big win for our community and now we got to get ready for region schedule.”

Linebacker Sidney Otiwu, who played a role in the victory also seemed pleased with the way his team performed.

“Just, no matter what, never giving up,” he said. “And at the end of the game, there sharing it with the students and everybody and the coaches and everything, that’s the best feeling in the world.”

It was a big thrill for the Hawks on the tenth installment of a major local rivalry in Georgia and a leg up for the team as they head into region play.

https://usatodayhss.com/2015/mill-creek-tops-dacula-in-team11-game-of-the-week
Mill Creek tops Dacula in #Team11 Game of the Week
I found this story on USA TODAY High School Sports and wanted to share it with you: %link% For more high school stories, stats and videos, visit http://usatodayhss.com.