National championship ahead for LSU basketball?

National championship ahead for LSU basketball? 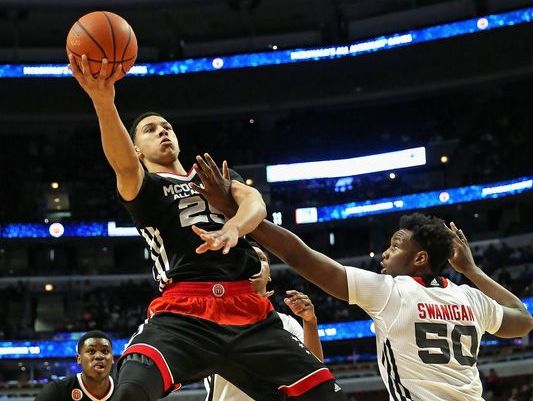 Apparently, the no-interview rule for freshmen football players at LSU has been punted for basketball.

“I think we’ll win the national championship,” LSU freshman guard Antonio Blakeney of Orlando, Florida, said Wednesday during a press gathering for some of the Tigers’ new players.

Blakeney said the above when asked how far he thought LSU could go in the 2015-16 season with the likes of freshman forward Ben Simmons — the consensus No. 1 high school player in America out of Montverde, Florida — and Blakeney himself, the No. 13 overall prospect in the nation by Rivals.com.

When asked if what he meant was that LSU would be in the national championship “mix,” this season, Blakeney would have none of it. He was not going to qualify his statement.

“I think we’re going to win the national championship,” he said.

After discussing the blossoming talent of the 6-foot-10 Simmons, who is projected as the No. 1 NBA Draft pick next summer, along with LSU’s other newcomers as well as several key returnees from an NCAA Tournament team last season, Blakeney asked, “Why would I not say we’re going to win the national championship?”

Blakeney and Simmons, who is not expected to play more than one season at LSU, were the only incoming freshmen in the land invited to the inaugural Nike Basketball Academy in Santa Monica, California, where they played against the likes of NBA stars LeBron James, Kevin Durant, Kyrie Irving, James Harden, Kobe Bryant and New Orleans Pelican Anthony Davis, whom Simmons held his own against. Some of the top veteran college players were also there, including guard Kris Dunn of Providence and forward Georges Niang of Iowa State.

“It was great,” Simmons said of the Nike Academy. “We got to go against NBA guys, so it was a great experience.”

Simmons did not make as bold a statement as Blakeney, but he was not bashful.

“I always feel like I can play against anybody. It doesn’t matter who it is — LeBron, Kobe,” he said. “I feel like personally I’m always going to give it my best.”

He is not concerned about any “adjustment” to the college game either. “No, I’ve been to the Nike camp, and I’ve seen all the other college guys,” he said. “So, I think I’m going to fit in well. I don’t think there’s going to be a really big adjustment. I showed at the Nike camp that I could guard the five man (Davis) down low. I think physically, I’m strong enough to guard anybody.”

He said the best player he faced at the Nike Academy was LeBron James, and two of his favorite former players are Scottie Pippen and Magic Johnson. But neither are models for his game.

“I never really modeled my game after anybody,” he said. “I take little parts of everybody’s game and try to put it into mine.”

Simmons, who grew up in Melbourne, Australia, takes a lot of his game from the pass-heavy European style. He is at LSU because of his father Dave Simmons’ friendship with LSU assistant coach David Patrick. Both the elder Simmons and Patrick played professional basketball in Australia and have remained friends. LSU will tour Simmons’ homeland of Australia next month playing a series of exhibition games.

Simmons, who averaged 28 points, 12 rebounds, 4 assists and 2.6 steals a game for Montverde Academy last season while shooting 70.7 percent with 24 double-doubles, also does not fit his game to one position.

“I see myself as a point forward,” he said. “That’s if I get a rebound, I take it down the court, run a play or facilitate the other guys. I’m more of a point guard. Because of my height, it doesn’t look like it. So I guess I kind of have to show everybody I can bring it up. I don’t have one set position. I’m one through five. Me being 6-1, I’m just a player. I don’t try and put myself in one position because that limits yourself. I really don’t have a spot where I play. I play anywhere.”

And LSU coach Johnny Jones is fine with that.

Selfish play is not one of the things Simmons does on the court. Previous coaches have had to tell him to stop passing the ball.

“That’s just not me,” he said. “It’s just the way I was raised. I play a European style of play. I like to pass (pronounced “poss”) the ball around and see guys score. So Antonio being able to be a shooter on the perimeter and everyone having to guard him out there, as soon as I drive, somebody has to help. So it’s easy for me to dish out there.”

Simmons was asked the same question as Blakeney concerning how far the Tigers can go in the 2015-16 season, but he basically passed off.

“We’re trying to make a future here, and now it’s our time and hopefully we can do that,” he said. “We have a lot of experienced guys, and they’re going to teach the freshmen a lot. I think we all have got to buy in and chip in, and we’ll be fine.”

LSU LOSES TRELOAR: Former Phoenix Suns director of player personnel John Treloar will not be coming to LSU as an assistant coach after all, LSU head coach Johnny Jones said Wednesday. Treloar, who was an LSU assistant on the Tigers’ Final Four team in 2006 under then-coach John Brady, had agreed to come to LSU as an assistant coach last April after the NBA Draft with the Suns. But he has since changed his mind and is interested in another NBA job.

https://usatodayhss.com/2015/national-championship-ahead-for-lsu-basketball
National championship ahead for LSU basketball?
I found this story on USA TODAY High School Sports and wanted to share it with you: %link% For more high school stories, stats and videos, visit http://usatodayhss.com.