No. 2 Roselle Catholic lost its second consecutive game and No. 23 DeMatha defeated No. 19 Simeon (Chicago) Saturday in the Spalding Hoophall Classic in Springfield, Mass. Photo by Jim Halley

The elite 2016 guard had 25 points and three steals to lead No. 23 DeMatha to a 69-45 defeat of Roselle (N.J.) Catholic on Saturday at the Spalding Hoophall Classic in Springfield, Mass. He spent last season on the JV team but has improved steadily.

“There’s no substitution for hard work,” DeMatha coach Mike Jones said. “He spends a lot of time in the gym. Everything he gets, he deserves and his teammates respect him because they know how hard he works.”

MORE: Brandon Ingram manages a tall order at the point

Fultz has also smoothed out his shot, making him more consistent at longer range.

“He’s worked on his shot,” Jones said. “He works with a trainer in the summer and really works all year round. He’ll get in our gym and put up hundreds of shots. We have a lot of gym rats on our team and he’s the leader of that bunch.”

The other frequent gym rats, DJ Harvey and Nate Darling, were the team’s next two highest contributors Saturday with 13 and nine points, respectively.

“For the most part, we executed what we wanted to execute against a very good team,” Jones said. “When they did go on a mini-run, whether it be 6-0 or 5-0 or 4-0, we usually hit a shot within our offense.”

Roselle’s Lions began the week undefeated and No. 2 and now have two consecutive defeats, including a 75-61 loss to Linden on Tuesday. Isaiah Briscoe had 20 points to lead Roselle Catholic, but by the time he got going, the game was out of reach.

“We changed defenses pretty frequently and Briscoe wasn’t as aggressive earlier in the game,” Jones said. “Once he decides to do something, it’s pretty hard to stop him anyway.”

Findlay Prep effectively slowed Jalen Brunson, the Villanova-bound shooter for No. 17 Stevenson (Lincolnshire), holding him to 26 points in an 84-58 win. Allonzo Trier had 27 points to lead the No. 1 Pilots (17-0).

“They’re too big and too strong,” said Stevenson coach Pat Ambrose. “Their shooting percentage was really high, especially in the lane. They were able to control the paint. We didn’t shoot particularly well and we would have had to to stay in this game.”

The Aztecs from Tempe, Ariz., needed a big three-point shot by Tyrell Henderson with two seconds to go for a 60-57 overtime defeat of Putnam (Springfield, Mass.). Marvin Bagley III and Dane Kuiper each had 17 for Corona del Sol.

Putnam trailed by 17 points at the half, but the Beavers, led by Tyonne Malone’s 21 points, fought to get back into the game and got the home crowd involved. 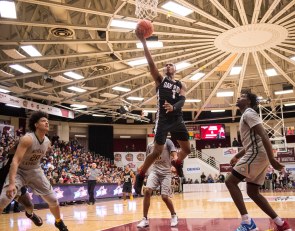 Perry powers No. 23 Oak Ridge past Roselle Catholic at Hoophall 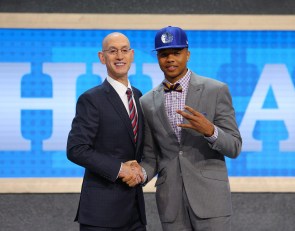 Athlete Look Back: No. 1 pick in the 2017 NBA Draft Markelle Fultz 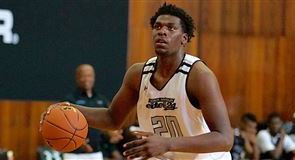 https://usatodayhss.com/2015/no-2-roselle-catholic-loses-second-consecutive-game-while-no-1-findlay-prep-rolls
No. 2 Roselle Catholic loses second consecutive game while No. 1 Findlay Prep rolls
I found this story on USA TODAY High School Sports and wanted to share it with you: %link% For more high school stories, stats and videos, visit http://usatodayhss.com.