To see the 25 teams as they are revealed or teams that have already been revealed, click here.

The defending Class 6A champions have the top DB in the country in Levonta Taylor, who has committed to Florida State. He also is among the most athletic players in the country, finishing in the top group at Nike’s The Opening in the combine.

Sophomore quarterback Tyler DeSue is getting big-time offers and his prime target will be junior wide receiver Tahj Capehart, a transfer from Landstown (Virginia Beach).

They won’t have their coach, Chris Scott, for the team’s first three games because he was suspended by the Virginia High School League for recruiting violations, although it is unlikely the team will be tested until the playoffs.

What we said earlier this summer about Ocean Lakes 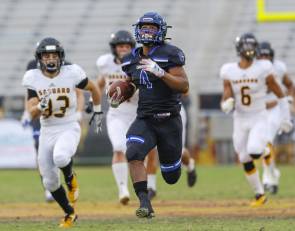 https://usatodayhss.com/2015/ocean-lakes-va-at-no-17-in-preseason-football
Super 25 in 25: Ocean Lakes (Va.) at No. 17 in preseason football
I found this story on USA TODAY High School Sports and wanted to share it with you: %link% For more high school stories, stats and videos, visit http://usatodayhss.com.