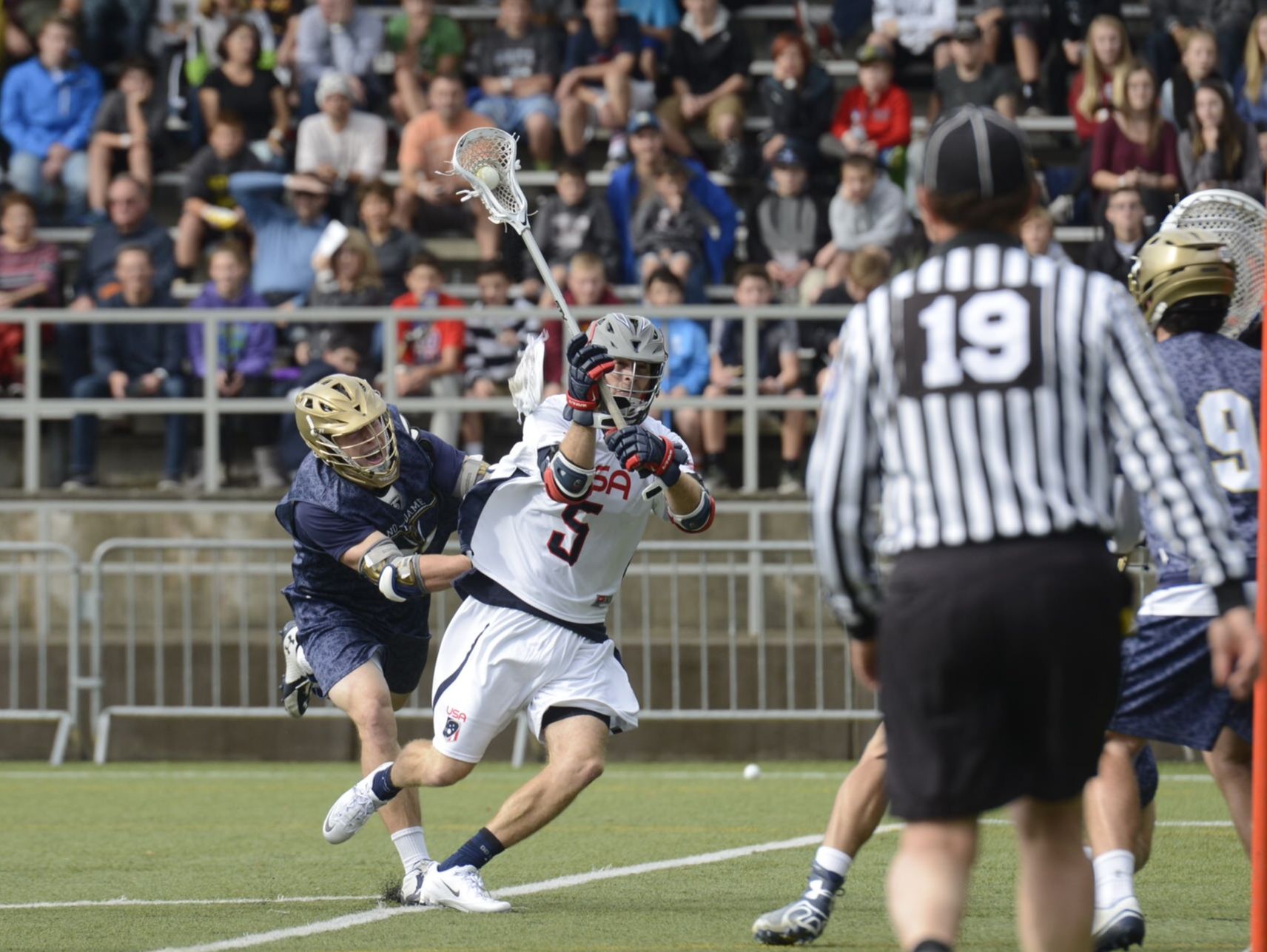 Seattle’s Drew Snider (center), then playing for the U.S. National Team, takes a shot on the Notre Dame goal during the 2014 Seatown Classic at the Starfire Sports Complex in Tukwila.

Snider is the first Washington native to be named to the All-Major League team. He led Denver with 35 goals and 11 assists this summer. In Denver’s season finale, he scored five goals to help the Outlaws come from behind and win it in overtime.

Snider, who also competes with the U.S. national team, is in his second year as head coach at O’Dea. The Fighting Irish went 8-6-0 last season.

Here’s more from the press release:

Concluding his fourth professional lacrosse season after a stand-out collegiate career that took the former Maryland Terrapin to the NCAA Men’s Div. I finals as junior and senior, Snider secured his first spot on the ALL-MLL Team after netting four or more goals on four separate occasions during the Outlaws 14-game campaign.

This summer, Snider led Denver in goals scored with 35 goals and 11 assists, matching a career-high 46 points, (31g, 14a) earned during his 2013 sophomore campaign. His season success included a five-goal Coca-Cola Player of the Game performance in the Outlaws season finale, come-from behind overtime win over the eventual 2015 MLL champion New York Lizards.

In the win, with Denver mounting a late rally to tie the game in the final minute of regulation, the 6-0, 175-pound midfielder who competed with the US National Lacrosse Team last fall in a Seattle exhibition game with Notre Dame, sprinted the length of the field just 26 seconds into the extra period to score the game-winner. Watch game highlights here. Last season, Snider scored the championship game winner with 56 seconds remaining to lift Denver to its first MLL title.

The award is Snider’s second prominent Major League Lacrosse honor. In 2013, he was chosen as the MLL Most Improved Player of the Year.

This spring, in Snider’s second season as lacrosse coach at O’Dea High School in Seattle, the 2013 nominee for the MTR Western Seattle Sports Star of the Year and resident of Seattle’s Queen Anne neighborhood, guided his alma mater to an 8-6-0 record in the Washington State Division I Metro Conference.