JACKSONVILLE, Fla. — 16 high school football teams competed in the Jaguars 2nd Annual 7 on 7 Passing Challenge, but only one team can call themselves the champions of this event: Potter’s House Christian Academy. 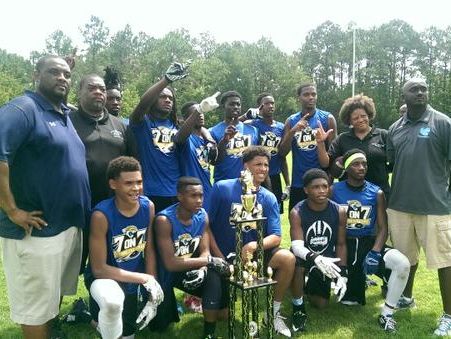 The Potter’s House Lions celebrate their win in the Jaguars 7 on 7 Passing Challenge.

The tournament began last Thursday, but an afternoon thunderstorm prevented it from finishing that day. Play concluded on Tuesday morning at the Bob Hayes Sports Complex on the Northside.

https://usatodayhss.com/2015/potters-house-wins-jaguars-7-on-7-passing-challenge
Potter's House wins Jaguars 7 on 7 Passing Challenge
I found this story on USA TODAY High School Sports and wanted to share it with you: %link% For more high school stories, stats and videos, visit http://usatodayhss.com.