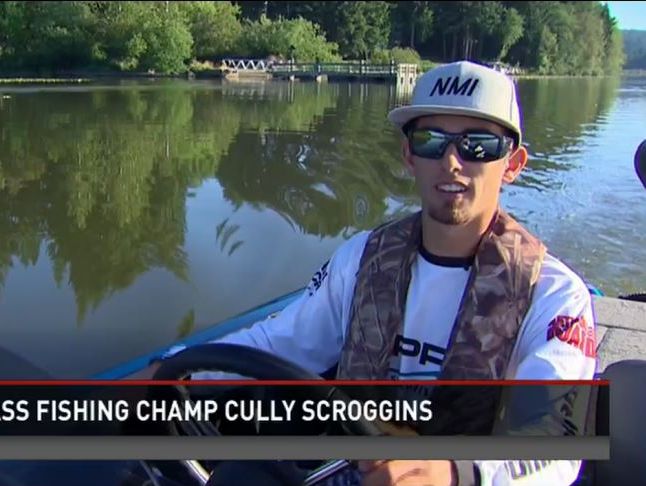 He started angling with his dad Gary at the age of two and says it’s tough to top the feeling of reeling in a big one.

“Your heart is pumping, your adrenaline is going, your shaking after holding it and letting it go, there is nothing like it,” he said.

Gary knew there was no such thing as a bass college, but didn’t have the heart to smash his son’s dreams. So the two fished on and Cully just kept getting better and better.

He practiced casting everyday and learned to land a lure anywhere he wants.

But Cully also knows if you want a hook a lunker, you need to know everything about them.

“It’s a whole science. Learning about the fish, knowing what they are doing at certain times of the day,” he said.

The R.A. Long grad won back-to-back state championships and placed 11th in a national tournament and that’s where this fish story really begins.

Tennessee is where Cully fished in the national tournament. It’s also where he discovered Bethel University, a liberal arts school that just happens to have a bass fishing team and one of the top coaches, Garry Mason.

“[I] come to find out he recruits like football or baseball team in college. He was like ‘your chances are very slim’.”

But Cully wouldn’t give up. He fished on and prayed about it every night.

“We’ve always been a family of faith,” Gary Scroggins said.

And soon, Cully’s prayers were answered — a call back from coach.

Coach Mason at Bethel had reviewed Cully’s resume and wanted him and his family to fly to Tennessee to meet him.

“My heart just leaked, when the coach said ‘your the type of man I want on my team,” Gary Scroggins said. “I could hardly hold the tears back.”

It’s actually history, as Cully becomes the first ever from the State of Washington to earn a bass fishing scholarship.

“It’s a miracle from God and he has plans for me in Tennessee,” Cully said.

The Bethel University Bass team is no joke. It has a 32-man roster and five boats, competing for February to June.

According to collegebass.com, there are now over 200 colleges and universities that have bass fishing clubs.

Administrators at Bethel University decided a strong fishing team could be a good recruiting tool, so they officially recognized it as a sport. Now, they welcome a youngster from the northwest to their school.

The only hard part will be father and son saying goodbye.

“Thats gonna be tough,” Gary Scroggins said. “Tough on this dad, not just losing you son, losing your best friend.”