Members of the NAHL Titans skate at the club’s main camp this past August.

MIDDLETOWN – When the New Jersey Titans announced its North American Hockey League (NAHL) affiliation in June, the organization was branded as a pipeline for local players to the next level of junior hockey competition and beyond.

And though the local additions to the club have been prominently featured, one shouldn’t overlook the international flavor of this outfit.

Though the majority of this 25-man roster is composed of American-born skaters, the NAHL – which is noted as the second best junior hockey league in the country and the only Junior A Tier II league sanctioned by USA Hockey – is also a haven for some of the top talent from around the world, and three such players will be calling Middletown Ice World home in 2015-16. Get to know them better below.

Bruno Birzitis: The 20-year old Latvian-born forward is entering his third year of NAHL competition after two seasons with the Soo Eagles, with which he recorded 49 points on 19 goals and 30 assists in 99 games. With such experience on his side, including three years of international competition at the World Junior Classic for Team Latvia, Birzitis will be counted on to help lead the Titans in the franchise’s inaugural season, and McKenna believes this skilled skater has the ability to further his career at the NCAA or professional level.

“One thing Bruno has is really good play-making ability,” McKenna said. “To his fault, he sometimes relies on that too much when he could just shoot the puck. We’ll have to snap him of that habit, but at the end of the day the kid can create offense. He knows what the league is about, and it’s about time for him to have a breakout year…Bruno can go as far as Bruno wants. He can play Division I college hockey or professionally back in Europe. The ceiling is pretty high for him. But he’ll need to push.”

Seyia Hayata: The 19-year old Hiroshima, Japan born defenseman will be competing at the North American junior level for his fifth year after a pair of stints in Canada in 2012 and 2013 with the Harrington Ice Bergs (Queens Court Hockey League) and CIHA Voyageurs (Ontario East Midget Hockey League), before making his NAHL debut in 2014 (one game) with the Soo Eagles, and delivering 17 points on five goals and 12 assists in 2015 with the Breezy Point North Stars (NA3HL). Hayata also has international hockey experience after suiting up in five games for Team Japan U20 at the 2015 World Juniors Classic.

“I think I’ll do fine (in the NAHL),” Hayata said. “I’m used to the American style of play. I’ve played in Canada since I was 13, and moved to the US two years ago. And I think we have the type of players on this team to be successful. We have skilled guys, but we also have guys who are mean and tough.”

“The one thing Seyia has from the start is very good skating ability, and everybody wants that,” Titans coach Rich McKenna said. “He can skate in any league, including the USHL. He can move the puck, but there’s a little bit of a learning curve for him.”

Daniil Kharinov: The 17-year old defenseman from Moscow, Russia played in both the Empire and Elite division of the United State Premier League in 2015 with the Richmond Generals, delivering seven points on two goals and five assists in 40 total games. At 6’4 and 220 pounds, Kharinov is the largest player on the Titans roster and a force in the making on the blue line, according to McKenna.

“Daniil is very much in a developmental role at this point. He’s a good player who has what you can’t teach, which is size. But his learning curve is a little bit steeper in regards to the level of competition he’s used to, age, and strength…but this is a kid that if everything comes together, he’s probably not here next year. He’s probably playing in the USHL.”

“The biggest differences (from hockey in Russia to North America) are the size of the rink, it’s a bigger Olympic sized rink back home,” Kharinov said. “It’s also a more physical style of play here, while we’re more about technique. But I think I’ll be able to compete.”

The inaugural season of the North American Hockey League (NAHL) Titans is also Rich McKenna’s first time behind the bench as a head coach.

The Greenwood Lakes, NY native was a standout and captain of the Don Bosco Prep ice hockey program in 2002, before attending Castleton State College.

McKenna went on to hold an assistant coaching position at his alma mater, as well as two years each with Wesleyan University, and the University of Connecticut.

Following his time at the D1 and DIII NCAA levels, McKenna earned another assistant coaching position and general managing position with the Muskegon Lumberjacks of the United State Hockey League.

While with the Lumberjacks, McKenna was responsible for the scouting and drafting of former Freehold Township and New Jersey Junior Titans star defenseman Zach Berzolla, who is a Division I Colorado College commit and is currently a member of the Lumberjacks roster.

McKenna will be joined on the Titans bench by assistant coaches Nick Perri and Oktay Armagon.

Perri joins the Titans after many seasons as a NAHL scout. He has also worked for the International Scouting Services as their East Coast scout, where he assisted the NAHL, USHL and other midget leagues. Perri was also a scout for the NAHL’s Coulee Region Chill for two seasons. In addition to his day-to-day hockey operations responsibilities, Perri will be the Titans’ video coach.

Armagon is a Queens, NY native who played at the collegiate level with both Townson and Rider University. Following his playing days, Armagon helped lead the Trenton Titans to the ECHL’s 2005 Kelly Cup title, and in 2012 he did the same for the Reading Royals. He has alos helped assist the Junior Titans U18AAA, U18AA/Jr. Development and Bantam A team.

Howell native Brad Becker will skate with the NAHL Titans in 2015-16.

Brad Becker: The Howell, NJ native was a Titans Main Camp invitee in August, and used his grinder-type style of play to catch the eye of Titans coach Rich McKenna. Becker recorded 14 points on six goals and eight assists in 18 games a season ago with the NAPHL Titans (the NAPHL is a feeder league for the NAHL), and this past winter helped Howell High School make its first NJSIAA finals appearance in program history while delivering 17 points on five goals and 12 assists in only six games played.

Joseph Schuler: Schuler was the Titans inaugural first round selection (number 13 overall) in this past June’s NAHL draft. The 18-year old Webster, NY native closed out his youth hockey career with the Buffalo Junior Sabres in grand fashion, delivering 57 points on 34 goals and 23 assists in 2015, and Titans brass believe he could put up another 50-point performance this season in Middletown.

Greg Malafronte: The Holmdel, NJ native was a 13th round selection this past June after a 30-point NAPHL campaign for Titans with 16 goals and 14 assists in 24 games. Malafronte also captained CBA to its second consecutive state championship in 2015 while delivering 25 points on 12 goals and 13 assists.

Anthony Cusanelli: The Holmdel, NJ native was a ninth round selection this past June following a 2015 season in which he skated for the NAPHL Titans and led the league in scoring with 40 points on 22 goals and 18 assists in 23 games. Cusanelli recorded 76 points on 41 goals and 35 assists in three seasons at CBA, and helped the Colts capture a share of the 2014 Non-Public state championship.

Mike Gelatt: The Middletown, NJ born skater was offered a tendered contract by the Soo Eagles earlier this year, before the franchise relocated to Middletown and rebranded as a Titans affiliate. Gelatt was a 35-point scorer for the NAPHL Titans in 2015, notching 12 goals and 23 assists in 24 games. Gelatt was also a standout for St. John Vianney this past winter when he delivered 58 points on 33 goals and 25 assists for the Lancers.

Keegan Miller: The Kalamazoo, Michigan born forward was the fourth leading scorer for the Soo Eagles a season ago, recording 37 points on 16 goals and 21 assists in 51 games. Miller joins Bruno Birzitis, Raymond Brice, Pat Gazzillo, and Jake Hamilton as players following the franchise from Michigan to Middletown.

Josh Creelman: The High Bridge, NJ born goaltender is a New Jersey Rockets product who played in the NAHL a season ago with the Kenai River Brown Bears, where he recorded an .891 save percentage and a 3.67 goals against average in 13 games. Creelman will be joined in the crease by Flourtown, PA native Kevin Gollmer, and Farmington Hills, MI denizen Spencer Wright, who was acquired on Aug. 16 from the Wilkes-Barre/Scranton Knights in a trade for former St. John Vianney defenseman Tim Gelatt.

Mike Gelatt of Middletown will Skate with the NAHL Titans this season.

Friday, Sept. 18: The Titans open its inaugural season at Middletown Ice World in a 7 p.m. tilt with Eastern Division rival the Aston Rebels.

Saturday, Sept. 19: It’s Titans Day at Middletown Ice World and Sports Complex from 3 to 6 p.m. Two-time Stanley Cup champion with the New Jersey Devils and Dallas Stars, Grant Marshall, will be on hand to sign autographs and greet fans. There will also be food, games, and giveaways, leading up to a 7 p.m. game with Eastern Divsion rival the Johnstown Tomahawks.

Friday, Oct. 2: Middletown, NJ native and former St. John Vianney standout Tim Gelatt makes his NAHL return to Middletown Ice World when the Titans host the Wilkes-Barre/Scranton Knights at 7 p.m. Gelatt was traded to the Knights by the Titans on Aug. 16. It will be the first of three appearances Gelatt will have against his brother and Titans forward Mike Gelatt at Ice World in October alone, as the Knights come back to Middletown on Oct. 23 and 30.

Dec. 11-12: The Titans open its inter-divisional schedule by welcoming the Kenai River Brown Bears in for a home and home series, with 6 p.m. and 7:30 p.m. start times, respectively.

May 12-15: The NAHL’s Central, Eastern, Midwestern, and Southern Division Champions will meet at a yet to be determined neutral site and compete for the 2016 Robertson Cup Championship.

Holmdel native Anthony Cusanelli will skate with the NAHL Titans this season.

The NAHL is about to enter its 40th year of operation and celebrated that anniversary with an eastward expansion, which led to the founding of the New Jersey Titans as well as the Wilkes-Barre/Scranton Knights, and Aston Rebels, all of which will be joined in the Easter Division by a league staple in the Johnstown Tomahawks.

In its 40 years of operation, the NAHL has had such notable alumni advance to the NHL as Mike Modano, Pat Lafontaine, Doug Weight, Brian Rolston, and Brian Rafalski.

A league flush with talent, five players who appeared in NAHL action in 2015 were selected in this past June’s NHL Draft. 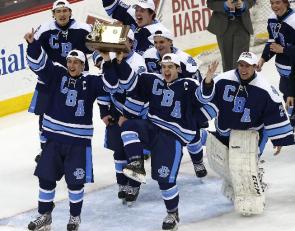 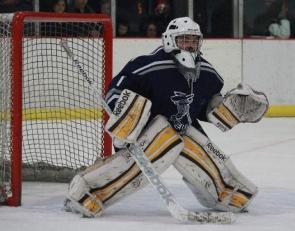 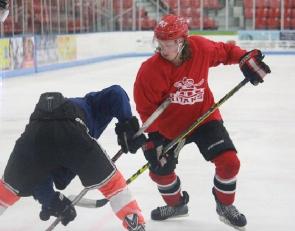