The Mardela high girls basketball team trailed Pocomoke early in a game on Dec. 8 by a score of 8-2.

The senior forward scored six straight points for Mardela to close the gap between them and their rival, but after she scored the third basket of her run – a running floater as she sprinted towards the basket – a whistle blew.

Her coach, Kesha Cook, waved Ross over and pulled out a ball with her name painted on. She had just scored her 1,000th point of her high school career, and she had no idea.

“I remember at the end of last season they said I was close, but I didn’t think I was like, that close,” Ross said. “Nobody told me, so when they blew the whistle I was just looking around like, ‘What?’

“It was a good surprise.”

Nearly in tears, Ross and her coach held the ball together, posed for a few pictures and then got back to business.

Mardela would go on to lose that game, 54-33, but to Cook the most important thing that this young Warriors team gained from that loss was experience.

“It’s good for us because we’re so young,” Cook said of the loss to Pocomoke. “It gets us ready for what the season is going to be like. We’ll just have to prepare from here. They are still learning how to work together as a team.”

As one of just three seniors on the team – and the one with the most varsity level playing time – Ross is in a new role this year. She isn’t playing second fiddle to a primary scorer, but she isn’t trying to stuff a stat sheet with points either.

This season, Ross is a leader. She plans to use her senior season to lead by example and hopes that some of what she has learned from previous Warriors’ players rubs off on her younger teammates. The goal being to help propel this young Mardela team back to the top and set them up for success after Ross has graduated.

“I’ve known a lot of these girls since they were younger,” Ross said of her budding teammates. “Like Shorty (freshman Armani Banks), I’ve known her since third grade and she is playing great. We’re teaching her more cuts to the basket. She’s catching on and playing great and I just like being a leader and helping them learn more and adapt to the high school game.”

When the Mardela girls got new uniforms this year, a no. 1 was available. So Ross took that and gave Banks her old jersey number, 10.

Mardela’s Taylor Ross floats up a shot against Pocomoke on Dec. 8, 2015.

Learning from the best

Ross came to Mardela two seasons ago as a sophomore. After playing her freshman season at James M. Bennett, the culture of winning attracted her to the green and gold.

Standing next to Cook, DeMyra Selby, Brianna Cook and Shakema Dashiell, she was the youngest player Mardela had that was featured on the front cover of the Daily Times’ sports section on Dec. 4, 2013. The headline read, “Stacked,” and was accompanied by a story that outlined Mardela as the girls basketball favorite for that season.

Ross watched other players get their 1,000 points and get their ball – she even watched Selby notch her 2,000th point last season.

“It was great motivation watching DeeDee (Selby) just push and push and try to get better after she got her 1,000 to get her 2,000,” Ross said. “I think I learned a lot playing with that group and I grew as a player. They all pushed me to better myself.”

Coaching players like Selby, Dashiell and others, Kesha Cook has been fortunate enough to have a plethora of excellent girls basketball players come through the program at Mardela. When Ross scored her 1,000th point on Tuesday, Cook was elated for her and said that Ross reaching the milestone spoke to the tradition of the program.

“It speaks volumes to what this program does,” Cook said. “All of these girls come out and work hard every year to get these honors. (Ross) really worked hard. She came into a new program and bought in to our philosophy and just ran with it. It was great to see her get it.”

In her fourth season of varsity basketball in the Bayside Conference, opposing coaches know all about Ross. She’s a fierce competitor, a tough defender and a dynamic scorer that can get to the basket in a variety of ways.

She’s been one of the best in the Bayside for some time now.

“She’s a good shooter,” Pocomoke head coach Gail Gladding said. “(Mardela) depends on her a lot and when we play them we want to make sure that we slow her down. We always knew she was going to be a good player for them and we have to watch out for her.”

Ross is also a talker on the court. Whether it’s talking up her teammates or trying to get an edge over an opponent, not many plays go by where Ross isn’t vocal.

And this season her coach needs her to do that even more as one of the veteran leaders. Cook pointed to one play in particular on Tuesday night where Ross picked up her fourth foul. Instead of sulking or barking at the ref, Ross shook the call off and continued to cheer on her teammates.

That, Cook said, is how a leader plays.

“It’s very valuable having Taylor around,” Cook said. “She encouraged her team and that’s what a leader does. With a young team you have to coach them throughout the whole game and she did that very well.”

Like her old teammates Selby, Cook and Dashiell have gone on to do, Ross has hopes of playing basketball at the college level. Over the summer, she visited Arizona Christian University and fell in love with it right away.

“I loved the environment there,” Ross said.

It’s a Division I NAIA school, similar to where Selby plays at Washington Adventist. Ross is still waiting on some test scores to come back, but hopes that college hoops are in her future.

In the present, she’s just focused on the season, focused on being a leader, focused on winning and trying to figure out ways to make this Mardela team better. 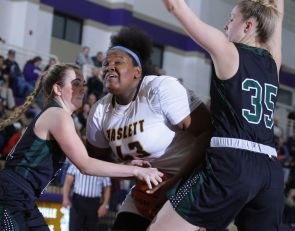 Senior helps propel No. 3 Williamston past Haslett in districts 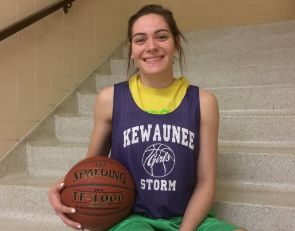 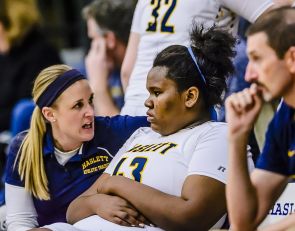 https://usatodayhss.com/2015/ross-in-a-leading-role-for-her-senior-season
Ross in a leading role for her senior season
I found this story on USA TODAY High School Sports and wanted to share it with you: %link% For more high school stories, stats and videos, visit http://usatodayhss.com.