Here are five of the most intriguing matchups to watch for at the Spalding Hoophall Classic (Springfield, Mass.) this weekend.

The Intrigue: Briscoe, a Kentucky signee, is the top ranked floor general in the ESPN 100 and Fultz is a four-star junior whose play has kept his stock on a steady climb all season. Fultz, like every other guard who laces ‘em up against Briscoe, undoubtedly sees this matchup as an opportunity to skyrocket his ascension, but it won’t be easy; Briscoe’s not nicknamed “Must-See TV” for nothing.

Watch how Briscoe gets it done.

MORE: Spalding Hoophall Classic has evolved into a must-see event

Watch how Thornton gets it done.

The Intrigue: Diallo is ranked No. 7 overall in the ESPN 100 and Bryant is ranked No. 16. Both players are bruisers in the paint who bully opponents into submission and have an affinity for finishing plays with rim-rocking dunks. A head-to-head matchup could mean early foul trouble for one so it’s paramount that someone establishes himself early. Which will it be?

Watch how Bryant gets it done.

The Intrigue: Giddens, an Ohio State signee, controls all things in the paint for the Warriors and Bragg, a Kansas commit, does the same for the Vikings. Both players ferociously attack the rim, swat shots and rebound, but Bragg gets more touches than Giddens offensively. Can Giddens slow Bragg’s production and give it back?

Watch how Giddens gets it done.

The Intrigue: Simmons, an LSU signee, is the consensus No. 1 overall player in the country; Jeter, a Duke signee, is ranked No. 9 overall and Zimmerman checks in at No. 10. Simmons has yet to be even slowed down this season, dominating teams to the tune of 30 points and 12 rebounds a game. But Jeter and Zimmerman form arguably the most talented, physically imposing frountcourt in the country and have the athleticism to give Simmons fits. If they can accomplish that tall order, the Gaels may very well be able to pull off the upset.

Watch how Zimmerman and Jeter get it done. 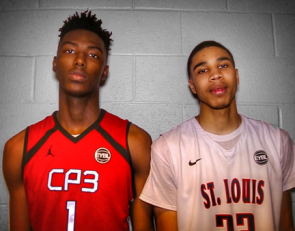 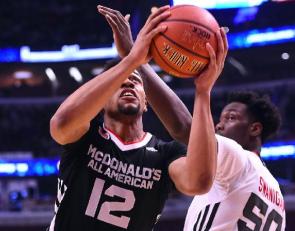