Making of an AAU team: Team Wall wants to build chemistry headed into its first tournament

Making of an AAU team: Team Wall wants to build chemistry headed into its first tournament

USA TODAY High School Sports has been given exclusive access inside the making of the new AAU program started by Washington Wizards star John Wall. Here is the next installment.

RALEIGH, N.C. – Rob Whitfield isn’t unlike most talented players who, at least initially, think there’s a direct correlation between talent and instant success.

Relative for a guy who cranked in 22 points a game this past season at Wake Christian Academy (Raleigh, N.C.).

But after two weeks of grinding with Team Wall (N.C.) in preparation for battle on the wildly unforgiving adidas Gauntlet, it’s clear to Whitfield and the other 19 players, which make up 17-and-under and 16-and-under teams, that no matter how many guys can drop 40 points or snag 20 rebounds or leap for unreal dunks in a single bound, chemistry will be the most vital ingredient in winning.

“We’ve got the best players in the state, but we’ve got a lot of work to do,” said Whitfield, a junior scoring guard for the 17’s. “We just have to learn each other’s tendencies and all that stuff because once we get out of the state the competition is gonna be a lot better.”

First stop is Dallas for session one on the adidas Gauntlet; the 17’s play three games Saturday while the 16’s get started Friday evening.

“All of these guys are stars or have the potential to be stars,” Team Wall director/coach Kendrick Williams said. “The challenge is to get each of them to learn their role and, more importantly, buy into it.”

Malik Johnson knows the importance, and benefit, of buying in. Last month he helped Terry Sanford (Fayetteville, N.C.) win the state title. He said building chemistry with new teammates doesn’t only happen on the hardwood.

“We just need to hang out and get to know each other, period,” said Johnson, a freshman point guard for the 16’s. “The more we’re around each other the more we’ll know each other on the court. As the point guard, I definitely feel like I have to be more of a leader with that. It’s good that we’re seeing what we need to work on so we can be ready. We’ve got the talent to do some big things.”

He said that, sometimes, the pressure to perform for the hundreds of college coaches who will be in attendance can hurt the chemistry with a new team.

“I look at Team Wall the same way I do my football team, it’s gotta be a family first,” said Bowman, a junior combo guard from Havelock (Havelock, N.C.) who runs with the 17’s. “I definitely feel like I can help bring everybody together; it won’t be hard because everybody’s cool. It’s my first time coming into a situation where I didn’t know most of the players, but it just means we’ve gotta work on gelling together faster. It’s like Kentucky this year; they had to put their egos aside and be a family. Look what they did.”

Williams said Team Wall has the pieces in place to have similar success, but, more importantly, wants his team to put forth an effort representative of its founder, Washington Wizards All-Star point guard John Wall, a North Carolina native.

“It’s been challenging,” Williams said. “It’s only been 49 days since John announced the team and in that time we’ve gone all over the state scouting players then holding tryouts then picking teams and now trying to get those teams ready to play on the most competitive circuit of the summer. It’ll be tough, but this is what bring out greatness in players. You’ve gotta love it!” 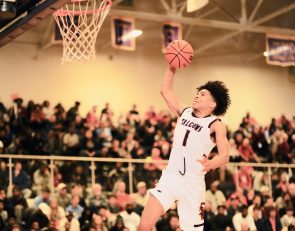 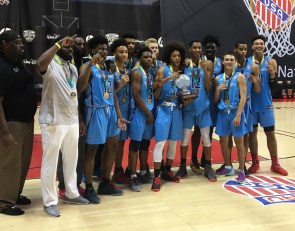 https://usatodayhss.com/2015/team-wall-john-wall-wizards-john-wall-aau-team-team-wall-rob-whitfield-jalen-johnson-kendrick-williams-john-wall-washington-wizards-aau
Making of an AAU team: Team Wall wants to build chemistry headed into its first tournament
I found this story on USA TODAY High School Sports and wanted to share it with you: %link% For more high school stories, stats and videos, visit http://usatodayhss.com.