Is Arizona’s Scooby Wright the best player in the Pac-12?

This story was originally published June 16, 2015.

The Pac-12 lost Heisman Trophy winner Marcus Mariota, but the conference should be just fine without the Oregon quarterback.

There’s plenty of talent in place, especially in the South division. My preseason Top 25 players:

The Huskies have a habit of turning out two-way players and Baker could be next in line. As a true freshman last season, Baker started every game at safety. In the spring, he also worked at running back and slot receiver.

Tell us: Who do you think should be No. 1 on this list?

Simone wasn’t even on scholarship at this time last season. In just over a year, however, he has blossomed into a fearless safety and team captain.

Working with a first-year quarterback, the Texas transfer made a splash in his first season in the desert, catching 73 passes for 1,019 yards and nine touchdowns. With a more seasoned Anu Solomon, expect bigger plays this year.

Vanderdoes, who has 19 starts in two years, teams with Kenny Clark to anchor UCLA’s defensive line. Last year, he recorded 50 tackles, including 5.5 for loss.

Wilson was one of four Pac-12 running backs to average 100 yards per game last season, and he did it as a freshman. Perhaps most impressive, four of his seven 100-yard games came during the second half of the season.

Lobendahn last season started every game and made just about every All-Freshman team that exists. He’ll compete for all-conference honors this season as the Trojans try to vault back to the nation’s elite.

With the ball in his hands, Adams — who has started 26 consecutive games — is as dangerous as anyone in the conference. The 2014 All-Pac-12 selection returned both his interceptions for touchdowns last season. He also returned a kick-off 100 yards for a touchdown.

Despite missing two games last season because of injury, Dimick had 10 sacks, which tied for seventh-most in school history. He also finished fourth in the Pac-12 with 1.32 tackles for loss per game.

The Chandler Hamilton product started 26 consecutive games before suffering two ACL injuries, which cost him last season. When healthy, he’s among the Pac-12’s top linemen. This season, he expects to be healthy.

Photos: A closer look at the Pac-12’s football stadiums

A Chandler High product, Perkins last season became the first Bruin to lead the conference in rushing since 2001. His 1,575 – the second most in UCLA history – ranked 15th nationally.

A 1,000-yard rusher as a sophomore, Marshall last season moved to receiver, and he was pretty good there, too, catching 74 passes for 1,003 yards and six touchdowns. Lesson: Put the ball in Marshall’s hands, and good things usually happen.

The 2014 Pac-12 Freshman Defensive Player of the Year, Jackson is a jack-of-all trades, starting at corner, yet contributing on special teams and offense as well. Against Notre Dame last season, Jackson started at both corner and receiver. He also averaged 29.7 yards on kick-offs, returning two for touchdowns.

You can’t make a Top 25 list without representation from Stanford’s offensive line. Murphy moves to left tackle after starting last season at right tackle, where he was a second-team All-Pac-12 selection.

On an off Saturday last season, ASU coach Todd Graham found himself flipping between games. He stopped on California-Colorado, The reason: Spruce. “He’s phenomenal,” Graham said. Indeed, Spruce had 19 passes for 179 yards and three touchdowns that day. He finished the season with 106 receptions and 12 touchdowns, both school records.

Foster last season was among the Pac-12’s top play-makers, lining up in the backfield or in the slot. This season, he moves full-time to receiver, but offensive coordinator Mike Norvell will continue to use the senior all over the field.

Over the last three years, Tuerk has showed off his toughness and versatility, starting at four positions on the offensive line. Last year, he was a first-year All-Pac-12 selection. This season, he could be an All-American.

Among the nation’s more versatile players, Jack last season had at least six tackles in 10 games and finished as the Bruins’ second-leading tackler. He’s no longer a young, exciting player with potential. This is his defense.

No one in the Pac-12 runs harder than the 5-11, 212-pound Booker. Last season, he posted 100-yard rushing efforts in his first five conference games. He finished with 1,512 yards and 10 touchdowns.

Kessler last season produced the most efficient passing season in program history, completing nearly 70 percent of his attempts for 3,826 yards and 39 touchdowns with just five interceptions. Can he duplicate such production?

A 2014 All-Pac-12 selection, Cravens is one of the conference’s top defensive play-makers. Last season, he produced 17 tackles for loss, including five quarterback sacks. He also intercepted a team-high three passes.

USC’s Kessler will get most of the preseason pub – and deservedly so– but Goff may have a higher upside. Last year, in his second season of starting, he threw for 3,973 yards (a school record) and 35 touchdowns (another school record) with just seven interceptions. Steady improvement makes Goff the Pac-12’s best quarterback in 2015.

As a true freshman last season, Freeman rushed for 1,365 yards and 18 touchdowns, earning Freshman All-America honors. He could play an even bigger role as the Ducks try to repeat as Pac-12 champions and return to the College Football Playoff.

Can a defensive player these days win the Heisman Trophy? Probably not, but Wright deserves preseason consideration. Last season the hard-hitting linebacker — with 29 tackles for loss — collected nearly every major defensive award, including Pat Tillman Pac-12 Defensive Player of the Year. 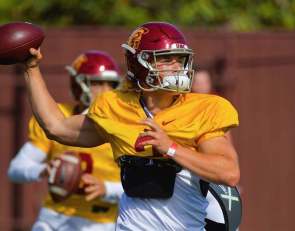 https://usatodayhss.com/2015/top-25-pac12-football-players-for-2015-season
Top 25 Pac-12 football players for 2015 season
I found this story on USA TODAY High School Sports and wanted to share it with you: %link% For more high school stories, stats and videos, visit http://usatodayhss.com.