Trinity Christian ranked No.1 small school in the nation by MaxPreps

Trinity Christian ranked No.1 small school in the nation by MaxPreps 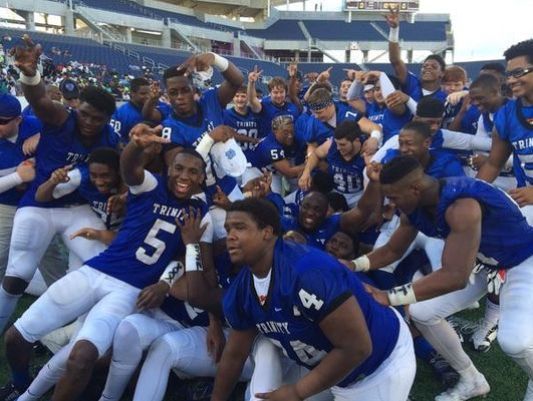 The 2014 Florida Class 3A state champion Trinity Christian Conquerors will start the 2015 season as the number-one ranked football team in the nation in MaxPreps small schools preseason rankings.

JACKSONVILLE, Fla. – The 2014 Florida Class 3A state champion Trinity Christian Conquerors will start the 2015 season as the number-one ranked football team in the nation in MaxPreps’s small schools preseason rankings.

The Conquerors, who finished the 2014 season as the number-one small school in the nation, begins 2015 in the same spot, despite losing 15 graduated seniors who will play college football this fall (12 for Division I programs).

To stay on top the Conquerors will need to find a way to replace players on both sides of the ball like middle linebacker Victor Alexander (Georgia Tech), linebacker Jeffery Holland (Auburn), two-way lineman Kendrick Norton (Miami) and receiver Chris Barr (South Florida).

Offensively, the Conquerors return a pair of running backs in senior Jalin Buie and junior Rasheen Martin. Martin led the team with 814 yards last season. His nine touchdown runs were second on the team.

Buie will see a bump in his role in 2014 with the departure of Holland, who also carried the ball 61 times last year, and Michael Clark, who had the most carries of any player for Trinity Christian in 2014. Buie carried the rock 44 times for one score as a junior. That production should go up in 2015.

The Conquerors also return one of the most consistent quarterbacks on the First Coast from 2014 in senior Billy Cobb. Cobb threw for over 1700 yards last year with an impressive touchdown-to-interception ratio of 23-to-4.

The loss of Barr is probably the biggest question for Trinity Christian offensively. Barr’s 54 receptions were more than double what any other receiver had for the Conquerors in 2014. Returning seniors J.C. Flowers and Brandon Robinson were second and third on the team with 18 and 17 catches respectively.

Defensively, the Conquerors should be anchored by a pair of returning seniors in defensive end/middle linebacker Anthony Mitchell and defensive end Dominique Ross. Mitchell had 56 tackles in 2014, the most of any returning player. He also had 14.5 tackles for loss and 6.5 sacks.

Ross should be the team’s best pass rusher, especially if he can build off his nine sacks from a year ago.

The Conquerors will have some competition for both their number-one national ranking and to three-peat as Class-3A champions. Fellow Class-3A member Oxbridge Academy (West Palm Beach) comes in as number three in MaxPreps’s preseason small school ranking.

https://usatodayhss.com/2015/trinity-christian-ranked-no1-small-school-in-the-nation-by-maxpreps
Trinity Christian ranked No.1 small school in the nation by MaxPreps
I found this story on USA TODAY High School Sports and wanted to share it with you: %link% For more high school stories, stats and videos, visit http://usatodayhss.com.