Tumwater comes from behind to beat Archbishop Murphy 24-21

Tumwater comes from behind to beat Archbishop Murphy 24-21 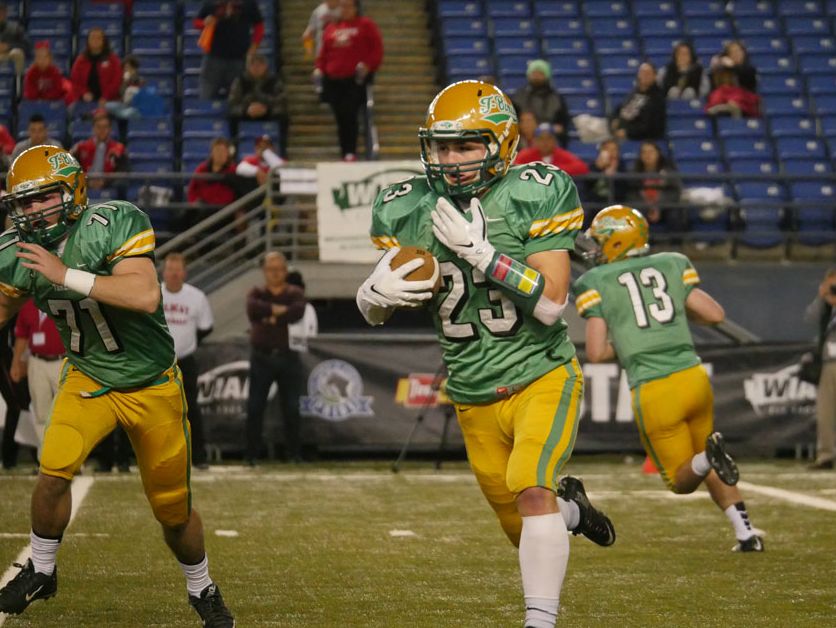 After Tumwater lost a heartbreaker to Sedro Woolley in state semifinals last year, the theme for the Thunderbirds’ season was Get the Job Done.

Tumwater lost to Sedro Woolley 28-27, which left a sour taste. Halfway through the fourth quarter against Archbishop Murphy, it looked like Tumwater might have a similar fate.

“There was a sense of urgency,” said Tumwater outside linebacker Cade Otton. “We knew we had to step it up.”

Tumwater beat Archbishop Murphy 24-21 and will play either Sedro Woolley or Prosser for the championship.

While it helps to have a spectacular play, Andrews said coming from behind was 90 percent mental.

“If all of us had our heads down, we wouldn’t have caught that fumble,” said Andrews “We would have just gave up.”

Tumwater head coach Sid Otton may the winningest high school football coach in Washington (record: 383-129), but he said this win was “way up there.”

Big defensive plays punctuated the game, but both teams struggled offensively to finish drives. The game was scoreless through the first quarter.

Archbishop Murphy (12-1) scored all three of its touchdowns in the second quarter. Connor Johnson hit Bailey Singh-Halpin for a 32-yard touchdown pass. Then Singh-Halpin then hauled a 40-yard pass, setting up Gurney for a 33-yard touchdown run on the following play. Johnson closed out the half scoring on a 1-yard quarterback sneak.

“They were definitely really physical,” said Otton. “I give them credit for that. It took us a while to respond.”

In the second half, Tumwater shut out Murphy, and kicker Nathan Seaman hit a 29-yard field goal in the third quarter to put the Thunderbirds a touchdown away from the lead.

Andrews finished with 121 yards rushing on 25 carries, and completed 7-of-12 pass attempts for 142 yards and an interception.

On defense, Devon Shedd-Kirkland had eight tackles, including four for loss, and two sacks. Otton had 7.5 tackles and a sack.

Archbishop Murphy head coach Jerry Jensen said the loss is disappointing, but hopes the game will be motivation for next year. The Wildcats will return a strong core on offense and will hope to make another deep run.

“This should make them focused and look forward to next year,” said Jensen.

https://usatodayhss.com/2015/tumwater-comes-from-behind-to-beat-archbishop-murphy-2421
Tumwater comes from behind to beat Archbishop Murphy 24-21
I found this story on USA TODAY High School Sports and wanted to share it with you: %link% For more high school stories, stats and videos, visit http://usatodayhss.com.