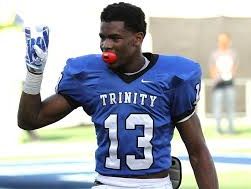 JACKSONVILLE, Fla. — For the first time in his football career, Tyreke Johnson is stepping out of the shadow of his older brother, Deandre and into the spotlight.

The football prodigy began playing on Trinity Christian’s varsity team at the age of 12. Since then he’s won two state titles. Verlon Dorminy said he knew he was special from the very beginning.

“There’s a lot of talented young men that come through here but I was saying the other day he could be the most talented ever,” Dorminey said.

That’s saying a lot considering some of the big names who have gone to the small school power.

Looks Johnson is ready to lead his team to its third straight state title.