When other girls high school basketball teams in the Bayside Conference see a game against the Pocomoke Warriors on their schedule, they know one thing and assume another.

They know that Dynaisha Christian is one of the best players on the Eastern Shore and that she is a force in the paint. Then teams assume that Pocomoke isn’t great at shooting from outside, so they can pack it in the middle on the Warriors and throw double and triple teams at Christian without it hurting them.

Perhaps at one time this assumption was true, but it isn’t any longer.

“We’ve been working on our outside shooting because that’s the one thing (other teams) say when they talk about us is that we can’t shoot from the outside,” said Warriors’ head coach Gail Gladding. “We didn’t force the ball inside. We want to get those outside shots so we can get the ball easier to Dynaisha so she doesn’t have to work as hard to get her shots off.”

Against Mardela on Tuesday night in Pocomoke, Gladding’s side was hitting those shots early and often. To start the game, Tymera DeShields hit a pair of three-pointers back-to-back to put her team up 6-0. The Warriors had a few more runs from there and won on Dec. 8, 54-33.

“I knew that they were trying to stop Dynaisha and that she would be facing a lot of double teams,” DeShields said. “Coach told us to look for outside shots, and I’ve been practicing them, so every time I was open I just took it.”

Mardela (1-1; 0-1 Bayside South) left DeShields open six times from behind the arc on Tuesday night and she made them pay for it, connecting on four of those shots.

“I have to be ready to shoot at any time, because I might not always be open. So when I am, I try to take advantage of it,” DeShields said.

DeShields tallied four assists and two rebounds on the night as well. She made most of her threes from the top of the key and was always ready to shoot, but when she wasn’t she was able to pass quickly and efficiently which led to easy points for her teammates.

The middle eventually opened up and Christian was able to stuff the stat sheet in the second and third quarters. After scoring just three points in the opening period, the senior forward scored 14 points for Pocomoke (2-0; 1-0 Bayside South) between the start of the second quarter and the five-minute mark in the fourth, which is where she fouled out.

Christian also added 11 rebounds, an assist, a steal and three blocks to her stat line, in addition to her 17 points.

Also stepping up big for Pocomoke in this one was senior guard Shayla Jones, who notched a double-double with 10 points and 12 rebounds, and also added a pair of assists.

Jones is small in size, but big in effort. Her scrappiness helped Pocomoke gain a big lead in the rebounding battle early and her defensive efforts proved to be important as well. Jones had four steals on the night.

Because Pocomoke was shooting more from outside, the shots that they did miss turned into long rebounds. Jones and her teammates were able to corral these offensive misses off the glass or rim and turn them into second chance points. Pocomoke had the edge over Mardela in the rebounding battle by a 41-26 margin.

Over the years, Pocomoke and Mardela have had their fair share of competitive battles and the Warriors versus Warriors matchups have turned into a bit of a rivalry. Mardela ran past Pocomoke on a few playoff runs in previous seasons, and Pocomoke upset Mardela on the road last season for the MPSSAA 1A East Region title.

“We were expecting Mardela to play a tough game,” Gladding said. “Their defense is strong and we’ve played each other a lot. They have a lot of new players. They lost some of their seniors and we were lucky to bring some back.”

Experience is an advantage for Pocomoke this season, but a disadvantage for Mardela. In past seasons, the opposite has been true.

Mardela has just three seniors on a 12-girl roster this season.

“I expected a tough game. (Pocomoke’s) experience showed and they played an awesome game,” Mardela head coach Kesha Cook said. “For us, this was good because we’re so young and its getting us used to what we’ll be facing.”

One of the few senior leaders for Mardela is Taylor Ross who was a key piece on the old Mardela teams as a sophomore and a junior that used to routinely beat Pocomoke. Now she’s in a veteran role trying to teach younger players how to compete with Pocomoke and the other teams in the Bayside.

Trailing 8-2 in the first quarter, Ross went on a 6-0 run of her own before a timeout was called. That timeout wasn’t to discuss a play or formation though, it was to honor Ross, who had just scored the 1,000th point of her career.

Cook pointed to one play in particular in which Ross picked up her fourth foul. Ross didn’t sulk, pout, slump her shoulders or shout at the ref — she shook it off and tried to keep the spirits of her teammates high.

“Having Ross around is very valuable,” Cook said. “She played like a leader tonight. We have a lot of season to go with just two games under our belt.”

Pocomoke will look to continue its early unbeaten streak on Thursday, Dec. 10, against Wi-Hi, while Mardela will look to bounce back against Crisifeld. 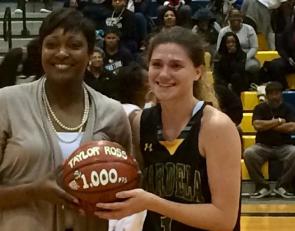 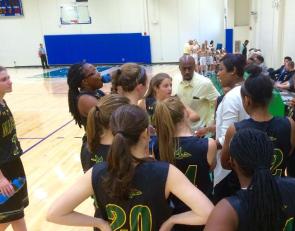 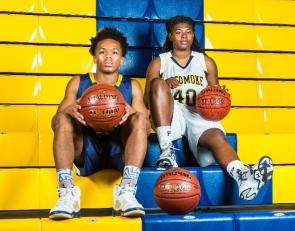 Pocomoke girls hoops has the potential to be scary good