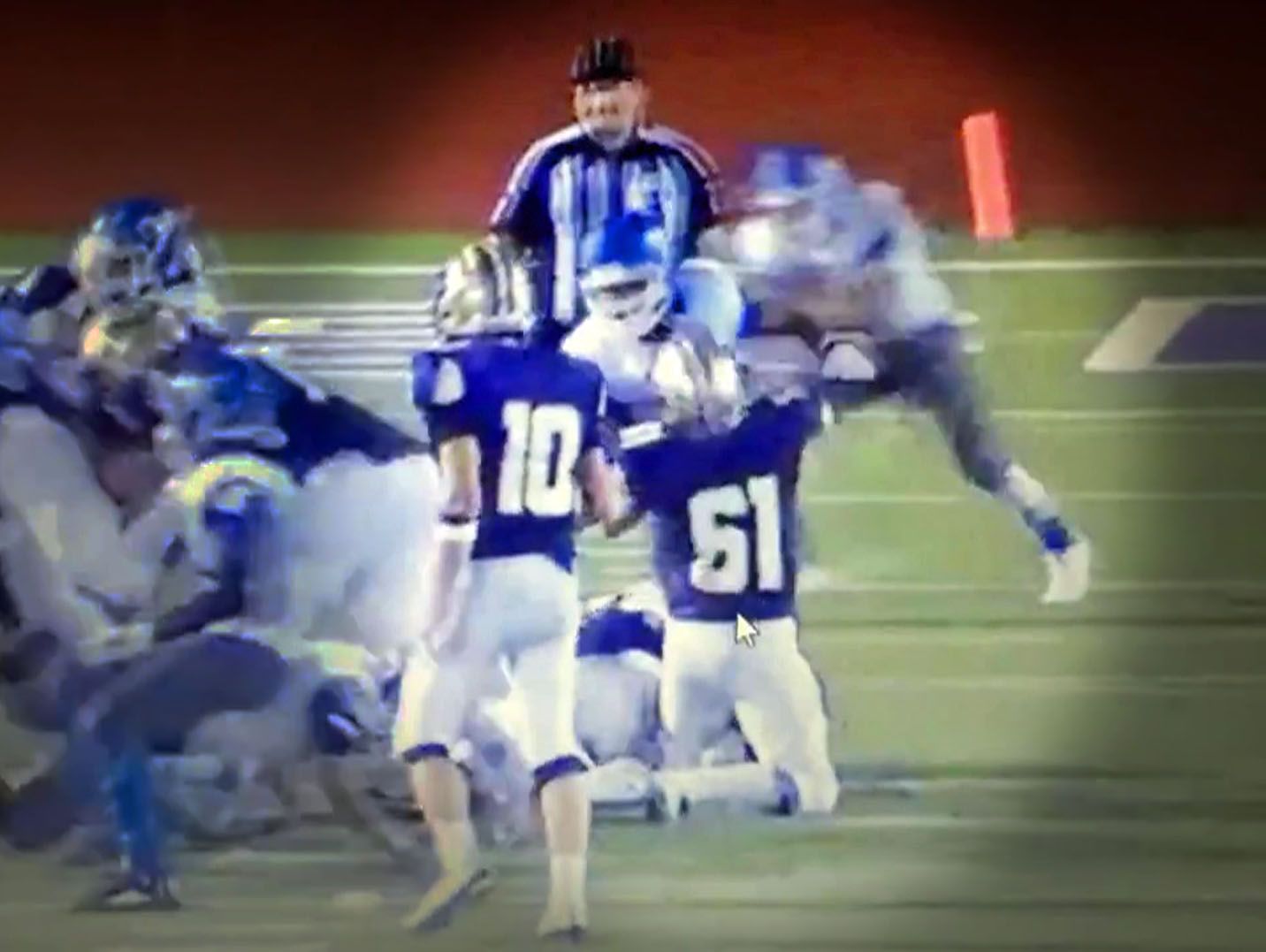 A video clip posted on YouTube by Greg Gibson appears to show a referee being targeted by a player at the game between John Jay and Marble Falls high schools on September 4, 2015.

The players have been suspended from the team pending an investigation.

The video was taken during the Mustangs’ game against Marble Falls on Friday, which John Jay lost 15-9.

In the video, a John Jay player — wearing No. 12 —  runs directly at the official during the play, starting from the Mustangs’ 5-yard line. He runs about seven yards before running barreling into the official, who is standing in the center of the field with his back to the player.

Both players were ejected from the game.

In a phone interview with KENS Sports’ David Flores on Sunday, NISD Athletic Director Steve Laing said the two players involved in the incident have been suspended from the team, pending an NISD investigation.

The player wearing the No. 12 jersey was ejected by the official after the play, but No. 81 remained in the game and another Jay player was tossed instead, Laing said.

The ejections came after Jay senior free safety Moses Reynolds was kicked out of the game following an altercation with a Marble Falls player. A fourth Jay player had been tossed earlier in the game.

Reynolds confirmed to KENS that he was ejected “a couple of plays” before the incident involving the official. Reyolds, who also plays quarterback for the Mustangs, said he got tossed from the game while he was playing defense.

This incident is extremely disturbing, not the sportsman like behavior we teach students at Northside ISD. We are cooperating with the UIL investigation. We will handle this incident on Tuesday morning and schedule a due process hearing which will include formal interviews with coaching staffing , the students themselves and other athletes, anyone who has knowledge of whatever was seen.

The bottom line is, Northside will not tolerate this type of behavior. It does appear the athletes intentionally tackled the referee, but we have not confirmed it.

Laing said the district would make a formal statement on the incident Tuesday.

The question that looms paramount is: Why did the two Jay players go after the official?

“We have to be very careful with what we say until we get the entire story,” Laing said. “It’s really unfortunate. We’re still getting stories on different things. That’s why we’ve got to make sure to get the entire story before we basically share it with everybody, because we don’t want anything out there to be assumed. We want to be very clear on exactly what happened.

Laing said he’s been in contact with the University Interscholastic League, which governs extracurricular activities in Texas public schools, since the incident occurred.

“There will be a process we have to go through in that regard as well,” Laing said.

On Sunday afternoon, the UIL issued the following statement:

“The UIL is extremely concerned about the actions portrayed in the football game between Marble Falls and San Antonio Jay. The League is working with the school districts and officials involved to conduct a thorough investigation. The UIL takes this matter very seriously and will take appropriate action once the investigation is complete.”

The Associated Press contributed to this report