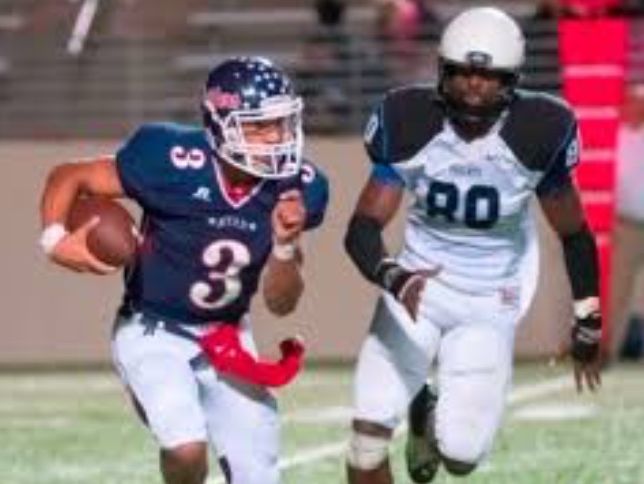 Denton has become the North Texas high school football quarterback capitol. Denton Guyer’s Shawn Robinson is well-known as a top dual-threat QB star who has already committed to TCU for the Class of 2017. The athletic Robinson has been a varsity starter since he was a freshman.

The other Denton QBs making a name for themselves are Denton Ryan sophomore Spencer Sanders, who started as a freshman for two games last season before being injured. Sanders threw for five touchdowns with 294 yards in a 43-20 win over Wylie East. Sanders will be one of the state’s top recruits.

TAPPS contender Argyle Liberty Christian (located Denton County) has Oklahoma State quarterback commit Nick Starkel as well … Also of note is Clayton Tune (sorry about that) … Tune is starting at Hebron after transferring from Denton Ryan. Playing defensive back first at Hebron, Tune took over at quarterback for Hebron and led the Hawks to a 35-28 overtime win against Plano to open District 6-6A. Tune completed 20-of-29 passes for 281 yards and scored the winning touchdown on a 1-yard run … Adding a cherry on top of the Denton QB cream, the Texas Longhorns are hoping redshirt freshmen Jerrod Heard of Denton Guyer is the quarterback in waiting to lead the program back to winning ways.

A week after a game-winning field goal as time expired, Mesquite Horn kicker Mark Reyna hit a 27-yard field goal at AT&T Stadium with three seconds left for a 35-33 win over Rockwall … Southlake Carroll defensive backs Obi Eboh and Robert Barnes made commitments this week. Eboh is a senior who has made great strides as he’s become a physically imposing hitter over the last two seasons. Eboh (6-2, 185) committed to Texas for the Class of 2016 … Robert Barnes (6-3, 190) has been a standout since moving up from the secondary to start as a linebacker late in Carroll’s 2014 state playoff run … Barnes is the son of former South Grand Prairie/Oklahoma linebacker Reggie Barnes (1988-1992) … Sophomore quarterback Mason Holmes has led Carroll to back-to-back wins since taking over as starter following SLC’s opening loss to Austin Westlake.

Oregon commit Seth Green showed great perseverance in taking over at Allen … After struggling in the spring after his transfer from Minnesota, Green didn’t start the opener, played better in Week 2 and took over as starter in a 45-15 win over McKinney Boyd. The 6-4, 220-pound Green passed for 220 yards and rushed for 111. He completed 11-of-18 passes with no interceptions … Three-time defending state champ Allen (3-0) has a 46-game winning streak.

Players to watch: Parish Episcopal junior running back Dominic Williams picked up an offer from Kansas this week. For the TAPPS DII defending state champs, Williams ran for 201 yards and three touchdowns on 11 carries in a win over Ferris … Washington commit Aaron Fuller of Lovejoy caught eight passes for 143 yards and three touchdowns in a win over Lake Dallas … South Grand Prairie defeated Arlington Martin, 28-20, behind Mississippi commit Greg Eisworth, who passed for two TDs, rushed for one and returned an interception 40 yards for a touchdown while playing his projected position as a defensive bak.