The high school wrestling tournament is king in Iowa. In case there were doubts, even as wrestlers and fans swarmed Des Moines this week, a Des Moines Register Iowa Poll confirms it.

High school wrestling is the prep sports tournament that Iowans most enjoy attending, watching or reading about in tourney-crazy February and March.

The wrestling tournament’s finals Saturday night are expected to enjoy their 28th-straight sellout, so it’s not a huge surprise that 15 percent of Iowans polled say it’s their favorite tournament, compared with the tournaments for high school girls’ basketball (8 percent) and boys’ basketball (6 percent).

There’s a gorilla in the room, however. The big overall winner is the NCAA men’s basketball tournament (36 percent), although it would likely poll well anywhere. Wrestling’s popularity in Iowa finds few challengers across the country.

“It goes back to old school,” said poll respondent Dan Sommerfelt, 37, of Troy Mills. “It started with farm kids who worked hard but didn’t have a lot to do in the winter.

“It’s more based on the individual. I have kids that are 8 and 5 who wrestle,” he said. “One of my kids got beat in a tournament, and he got pissed. I told him, ‘You’ve got to work harder.’ And he did. It’s that work ethic and that accountability.”

Wrestlers have long maintained their sport matches the personality of Iowans, who prize hard work over flash and egalitarianism over ego — alone on the mat, matched with like-sized individuals and strict rules of order.

The sport is also firmly embedded in the culture of Iowa, where the state tournament has averaged 73,000 fans each of the last 10 years. The University of Iowa led the NCAA in attendance last year for the eighth straight season, with a record average of 8,835 people attending dual meets. Iowa is also the only state that has had four schools win Division-I national titles (Iowa, Iowa State University, the University of Northern Iowa and Cornell College).

“Wrestling is part of the small-town culture. You support the community,” said Jennifer Casteneda, 49, of New London. “We have one wrestler at the tournament, and our doctor’s office sent him over a gift basket.”

Troy Dannen, director of athletics at the University of Northern Iowa, suggested that some support for boys’ and girls’ basketball may have been siphoned by the option of being able to choose the college men’s basketball tournament, which has become a cultural phenomenon called March Madness.

“The Super Bowl is that way, but there are not many events that transcend the sport itself like March Madness does,” said Dannen, whose team is nationally ranked and expected to play in the tournament. “People build their years around the first weekend of the NCAA tournament. It’s David versus Goliath; it’s the unpredictability of opening matchups.”

It’s the tournament bracket, where even casual fans take an interest by picking teams against friends.

Janet Goble, 76, of Des Moines doesn’t enter a pool, or even know much about this year’s likely Final Four contenders — yet. But she is one of the many who don’t miss tuning in to the tournament, joining 102 million Americans who watched it on TV last year. The 2014 Final Four set all-time attendance records and saw record-breaking online and television viewership.

“Before it starts, I look at who is playing and pick my teams, so I know who to root for,” she said. “I am a real underdog person.”

The prep basketball tournaments used to be king in Iowa before cable television began to broadcast so many college games, said Dannen, who once directed the Iowa Girls High School Athletic Union.

“Thirty years ago, girls basketball in Iowa might have polled higher than March Madness,” he said.

State tournaments were packed when the unique 6-on-6 game was featured. That style of half-court game ended in 1993.

“I hate that people blame everything on the loss of 6-on-6, but it was unique and the only place you could watch it,” Dannen said. “A lot of people said it was a made-for-TV game — fast-paced action and scoring.”

It isn’t just the style of play that has changed. Towns used to empty, and everyone headed for the tournament.

“Almost every town in Iowa had a chance to go to the state tournament, but now there is so much consolidation of schools,” said Keith Murphy, a longtime Iowa sports anchor with WHO-TV. “Now it’s five towns on one team, and in many cases, your arch rivals are at the same school. There is still pride, but it’s not just your town, your school, anymore.”

WATCH: Sights and sounds from the 2015 state wrestling tournament

Karen Keeran, 38, of Ankeny said she still likes the girls’ tournament the best, although she fondly remembers more excitement in earlier days.

Twenty-seven percent of poll respondents chose none of the events listed, which also included the college women’s tournament.

“We put too much emphasis on sports when there are real needs of society,” said James McNeely, 65, of Urbana.

Don’t tell that to the fans at Saturday night’s final. Murphy said nowhere else will you see fans that are more focused.

The Iowa Poll, conducted Feb. 15-18 for The Des Moines Register by Selzer & Co. of Des Moines, is based on telephone interviews with 807 Iowans ages 18 or older. Interviewers with Quantel Research of Ogden, Utah, contacted households with randomly selected landline and cellphone numbers supplied by Survey Sampling International. Interviews were administered in English. Responses were adjusted by age, sex and congressional district to reflect the general population based on recent census data.

Questions based on the sample of 807 Iowa adults have a maximum margin of error of plus or minus 3.5 percentage points. This means that if this survey were repeated using the same questions and the same methodology, 19 times out of 20, the findings would not vary from the percentages shown here by more than plus or minus 3.5 percentage points. Results based on smaller samples of respondents — such as by gender or age — have a larger margin of error.

Republishing the copyright Iowa Poll without credit to The Des Moines Register is prohibited. 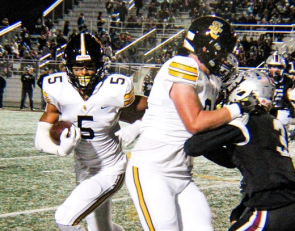 Which Texas high schools have won the most football state championships?

https://usatodayhss.com/2015/wrestling-reigns-as-king-of-iowa-tourneys-poll-shows
Iowa Poll: Wrestling reigns as king of Iowa tourneys
I found this story on USA TODAY High School Sports and wanted to share it with you: %link% For more high school stories, stats and videos, visit http://usatodayhss.com.