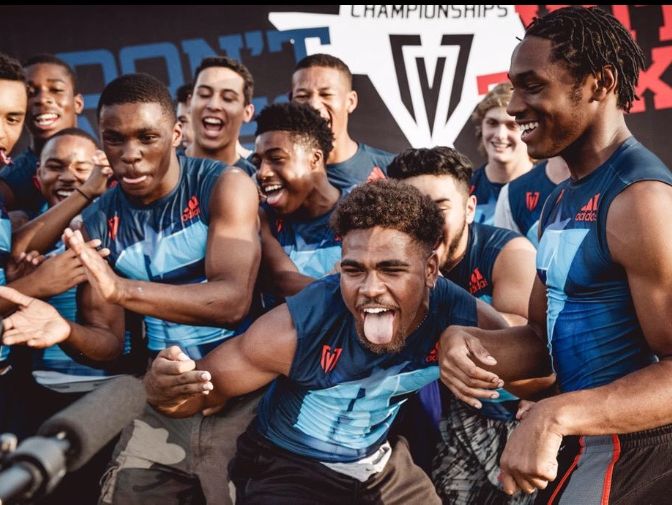 COLLEGE STATION _ Wylie East certainly has reached several milestones in its first five years. And with a strong showing at the Adidas 7-on-7, East looks like the benchmarks will keep coming. East reached the second round of the championship bracket before being ousted along with District 10-5A Lovejoy.

East competed well with standout senior receiver Jared Wyatt looking on the verge of another level on a breakout season which had more than 1,000 yards receiving only nearly 70 catches last season. The 6-2 Wyatt was all but un-coverable in the two of competition. He was catching passes from senior Kolby Williams, who performed well in place of returning starter Braden Shewmake, who had a conflict with a national baseball tournament. Shewmake is a Texas A&M baseball commit.

East is still building its youthful defense but got some big plays from Corey Dillon and Class of 2017 cornerback Jimmy Trevillion is another blossoming star. Trevillion is the younger brother of former East running back Jabari Anderson, who had more than 2,000 yards rushing in East’s 2012 playoff into the regional quarterfinals … Lovejoy performed well and came within an 2-point attempt in the final seconds to advance for the win … Forney QB Luke Skipper continues to shine with a performance to substantiate Coach Kevin Rush’s assessment that he’s the program’s best quarterback since former Dallas Cowboys backup Caleb Hanie.

7-on-7 results: Don’t look now, but Austin Westlake won the Division I title over ultra-talented Manvel a year after Todd Dodge took over. Dodge led Southlake Carroll to four state titles (five consecutive finals) before leaving for North Texas college route, but he’s a grandpa now and as relevant as ever at Westlake .. son Riley Dodge (now coach at Flower Mound Marcus) .. aged his dad in the spring … Fort Worth all Saints very impressive in reaching Final 8 of Championship Bracket as only SPC/TAPPS qualifier . Program remains one of the state’s best and not slowing down. All Saints assistant coach Blake Brockermeyer is former Texas/NFL star with young, big athletic sons going through the program now too. Not a coincidence: All Saints OL Mike Williams just committed to Stanford… Rowlett quarterback Logan Bonner (Arkansas State commit) and standout Class of 2017 prospect Ladarius Dickens highlighted one of the biggest upsets over DeSoto.

Program to Watch: Plano West improving in leaps and bounds as it adjusts to new coach Scott Smith… West has been good but Smith brings renewed energy with new offensive coordinator Russell Urbantke and a good QB competition between Logan Williams and Tanner Gillean … And who will replace 3-year star running back Soso Jamabo?Jamabo is at UCLA after a heralded career but speedy Tyler Campbell has moved from the secondary to running back and West has another standout talent in the mold (great vision and burst) of Northwestern signee Auston Anderson from 2013 … Former Plano West quarterback Jeremy Hodge has transferred to Parish Episcopal, whose high-powered offense makes it a favorite to repeat at TAPPS DII state champs … Mansfield Summit played without 6-5 receiver Curtis Hollis, who also is a top basketball recruit and played at a national hoops tourney. Hollis is getting football interest but it’s unclear where his future lies in returning to football for the first time since he was a freshman. Hollis has played well in the spring and summer and he actually is a little more like Kevin Durant playing football than Dwight Howard … Summit QB Braden Nolen looked good and fully healthy while speedy RB Derek Johnson shined as a receiver before being slowed by a hamstring. Summit looks strong but so does the rest of 14-5A with Mansfield Timberview, Mansfield Lake Ridge, Lancaster, Arlington Seguin and Waxahachie.

Making its first state 7-on-7 appearance, Waxahachie looked impressive as former Dallas Cowboys quarterback Jon Kitnatakes over the program and brought his son Jordan Kitna along has a talented senior quarterback. He has has 6-3 tight end Devan Brady as an FBS prospect to throw to as another transplant from Tacoma Lincoln …

Arlington Lamar QB Shane Buechele did make it down to College Station for a game Saturday morning after being the No. 2-ranked Elite 11 QB at Nike competition during last week at Oregon … From those in Oregon, Buechele not being ranked No. 1 a head-scratcher but “The Opening” also is a reality TV show and do you trust those outcomes?