Criteria included ranking on USA TODAY and Track and Field News national lists and the number of top performances, along with head-to-head competition during the regular season and in major postseason meets. 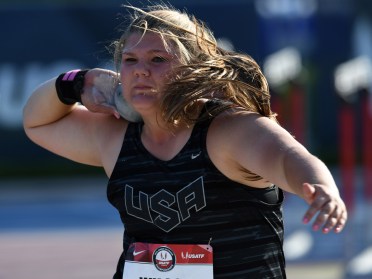 TRACKINGS: Wilson had the No. 2 all-time high school shot put, 55-9 1/4, to win the New Balance Nationals and ranked No. 2 this season with both the discus and hammer.

Bruckner dominated the discus at 186-10 (No. 4 all-time) and was the USATF Junior National champion, ahead of Phelps. Bruckner finished 16th at the U.S. Olympic Trials. She repeated as California (CIF) state high school shot put champion and was No. 2 in that event on the high school outdoor season list.

https://usatodayhss.com/2016/2015-16-american-family-insurance-all-usa-girls-track-and-field-throws
ALL-USA Girls Track and Field: Throws
I found this story on USA TODAY High School Sports and wanted to share it with you: %link% For more high school stories, stats and videos, visit http://usatodayhss.com.