Alina Faunce of Estero performs the backstroke portion of her 200 yard IM as she went on to win the third heat during the Region 3A-3 swimming at FGCU Aquatic Center.

Alina Faunce said there are no secrets.

The Estero senior, a standout swimmer and Alabama commit, said it’s a range of factors that are helping her find results and accolades at this point in the season: patience, hard work and determination.

Her performance at the Region 3A-3 championships Saturday at FGCU’s Aquatic Center was nothing short of spectacular, with the 5-foot-8 athlete setting two school records in the 200 IM (2:03.60) and 100 butterfly (55.75) and contributing to two other wins in the 200 medley and 400 free relays — the last of which pushed the Wildcats to a win in the final wisps of the race.

“I guess I would say it’s my mentality,” Faunce said of what’s been the difference this year. “It’s all confidence.

With the effort, two things happened: she guaranteed her ticket to the Class 3A championships next Friday at Sailfish Splashpark Aquatics Athletics Center in Stuart; and she helped Estero claim a second-place finish in the region – Gulf Coast narrowly edged the Wildcats, 244-242.5, by scoring in diving.

Faunce’s win in the 200 IM was her second straight title in the event. Teammate Mikayla Puckett’s win in the 100 breast stroke, in a school record 1:07.19, helped Estero score points late.

Clay Riemenschneider Fort Myers, won the third heat of the 200 yard freestyle during the Region 3A-3 swimming at FGCU Aquatic Center.

“It’s kind of shocking, because I wasn’t expecting this,” Faunce said of her school records.

The top 24 swimmers in each race from across four regions qualify for the state championships, with the top two places at regions earning automatic qualifiers.

“Nearly every girl swam her best time,” Estero coach Tim Jacobsen said. “And if it wasn’t, it was right there.”

Then there was Fort Myers senior Clay Riemenschneider.

Despite jumping into the pool just five years ago, the 6-foot-4 and 170-pound long distance athlete has flourished in minimal time and has become one of the top ranked swimmers in Southwest Florida.

On Saturday he won his first regional championship in the 200 freestyle with a time of 1:44.11 and was third in the 500 free in 4:40.76. Oddly enough, his win came after a third-place performance in the same race last week at the District 3A-9 meet.

“I’ve had these goals for a while, so it’s just nice to finally put it all together,” said Riemenschneider, who committed to Florida State recently. “For me, maybe early on I was more of an unknown. But at this point, I think I’ve proven myself and this definitely helps.”

Estero’s Alyson Currao placed 5th in the third heat of the 50 Yard Freestyle during the Region 3A-3 swimming at FGCU Aquatic Center.

Naples, John Scanlon takes off in the third heat of the 200 yard freestyle during the Region 3A-3 swimming at FGCU Aquatic Center. 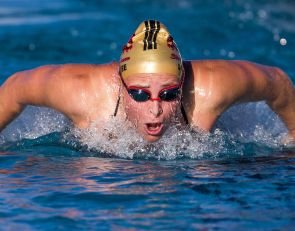 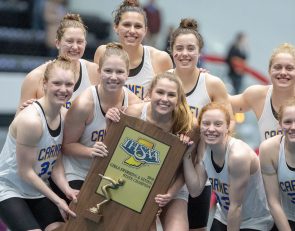 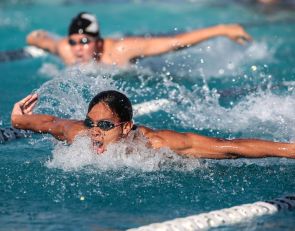 Alina Faunce said there are no secrets.