Belfry runs past Central for fourth straight Class 3-A title

Belfry runs past Central for fourth straight Class 3-A title 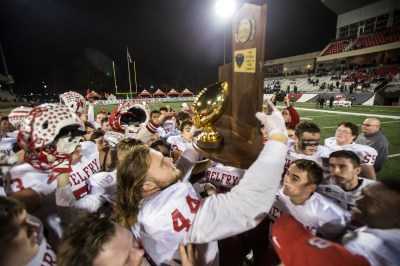 Belfry football players celebrate after a 52-31 victory over Louisville’s Central High School to claim the Class 3A State Championship. Dec. 3, 2016. Photo by Alton Strupp, The Courier-Journal.

The Pirates rushed for 407 yards and didn’t bother attempting a pass on their way to a 52-31 victory over Central in the Class 3-A state football championship game.

“I’m just overwhelmed,” said Belfry coach Philip Haywood, who added to his state-record total with his 417th career victory. “Winning the championship is always big, but to do this four times, very few teams in the state of Kentucky have done that. That’s always been their goal, and this is a great senior class.”

“That doesn’t come along too often,” Haywood said. “We’ll have a big kid every now and then that will go on and play, but we have four kids this year who have offers and that’s rare for a school our size where we’re located to all come through at one time.”

Central was forced to go to the air and senior quarterback James Simpson completed 19 of 38 passes for 310 yards and four touchdowns. Rico White (eight catches, 95 yards, two TDs) and U’Kari Baker (seven catches, 187 yards, one TD) were the top receivers.

But Simpson also was intercepted three times, and Central’s rushing attack was limited to 84 yards on 30 carries (2.8 yards per attempt).

“We didn’t expect them to shut our run game down … so that was kind of disappointing,” Central coach Ty Scroggins said.

Catron (58 yards) and Wellman (64 yards) both had long touchdown runs in the first quarter, and Austin Woolum’s 29-yard field goal gave the Pirates a 17-7 halftime advantage.

“I had no doubt we were going to drive the ball down the field,” Wellman said. “We have one of the best offensive lines in the state, and they proved it tonight. They don’t get credit a lot, but I want to give them all the credit for opening the holes I got tonight.”

Hunter’s 47-yard touchdown run made it 38-7 with 6:29 remaining and sparked a wild finish that featured 45 combined points. Simpson threw three late touchdown passes, the last one pulling Central within 45-31 with 30 seconds left.

But on the ensuing onside kick, Catron fielded the bouncing ball in stride and returned it 46 yards for the final score of the game.

Scroggins said Belfry’s offensive line lived up to its billing.

“They’re bigger than every team in Jefferson County, bigger than any team we’ve played, for sure,” Scroggins said. “We expected to be a grind-it-out game because we expected to get more stops. You can’t give up two long runs and expect to stay in the game. We just didn’t defend tonight, and they’re a better team than us.”

Scroggins said the loss will be toughest for his 15 seniors.

“They’re going to be sad … and if you’re an athlete and a warrior you shouldn’t be out here if you’re not sad,” Scroggins said. “We’ll mend it, and the sun will come out tomorrow and we’ll celebrate a runner-up trophy.”

https://usatodayhss.com/2016/belfry-runs-past-central-for-fourth-straight-class-3-a-title
Belfry runs past Central for fourth straight Class 3-A title
I found this story on USA TODAY High School Sports and wanted to share it with you: %link% For more high school stories, stats and videos, visit http://usatodayhss.com.