After tragic bus accident, cheerleaders from around Texas gather to lend support

After tragic bus accident, cheerleaders from around Texas gather to lend support

The Iraan High School cheerleaders gather for a group picture with the hundreds of other West Texas cheerleaders that came to support them (Photo: Ronald W. Erdrich, Abilene Reporter News)

ABILENE, Texas — Dahlia Butchëe, the mascot for Iraan High School, leaned on her crutches and smiled.

“I had no idea what I was expecting,” she said, not dressed as Tahoe, the mascot, this night, “but this is amazing.”

What amazed her were the 80-something cheer squads that had come to Abilene, one from Eunice, New Mexico, and the packed west-side stands at P.E. Shotwell Stadium — with fans still arriving after the Braves already had scored the game’s first touchdown early in the first quarter. On the other side of the field, where Wellington Skyrockets fans were loud but far less numerous, she could see a sign: “Praying for Iraan.”

“It is very heartwarming,” she said.

A week ago, after Iraan handily eliminated Munday in the Class 2A Division II high school football playoffs, a bus carrying six varsity cheerleaders and two adult chaperones, including sponsor Christina Garlock, was struck by an 18-wheeler that had crossed an interstate median on a rainy night. Elizabeth Pope, 52, Garlock’s sister and booster club president, was killed in the crash. The others were injured to varying degrees.

All six cheerleaders — some aided by crutches, a sling or a neck brace — made it to Abilene for Friday’s state semifinal. Before the game, two local Chick-fil-A restaurants provided a meal for the Iraan, Wellington and dozens of other cheer squads that included college groups. And then it was off to the game, where Braves band members rhythmically beat drums and arms chopped the brisk night air tomahawk-style. Before the teams came onto the field, smoke puffed from the inflatable Braves tipi, from which the team emerged led by junior varsity cheerleaders.

And as it has been said many times, the crowd went wild.

“Everyone is here,” Butchëe, a senior, said of her group. Even if the squad could not lead its team onto the field, “we can cheer with our voices. That will have to suffice.”

Almost front and center in the crowd was the cheer squad from Munday. Senior Kale Lewis said his group was in shock the week before after learning of the crash.

“We had just talked to them after the game,” he said. The pain of the quarterfinals loss gave way, he said, to prayer. “In a split second we went from losing a game to supporting Iraan.”

During the pre-game feed for cheer teams, Iraan High principal Jim Baum talked to a cheerleader, then gave her an arm hug.

She was Felicia Farley, a Sonora High junior. She said she contacted Baum the next day to offer condolences on behalf of SHS and offered her squad to cheer for the Braves the next week.

“He started to cry, or, as he said, ‘turn into a puddle of goo,'” she said. Forgotten was a stinging 37-27 homecoming loss to the Braves. “After all that, we still wanted to help.”

If Farley was among the first to offer Iraan support after tragedy, her squad was just one of many that came to Abilene for the Wellington game.

“I thought maybe a few towns would come, but we didn’t expect this many,” she said. Five hundred chicken sandwiches were prepared. The call went out for 100 more, then for another 50.

Across town, Abilene Cooper High band parents put on a barbecue dinner for 70-plus members of the Braves band, staff and chaperones. Said fourth-year band director Veronica Tagle, “It’s amazing to me how everyone has pulled together to support us. This is so encouraging. We really appreciate it.”

The band, she said, was to play selections at halftime that were favorites of Pope, an IHS grad. Those were to include “The Warpath” and “Here Comes the King,” popular “back in the ’80s” when Pope was in the band, Tagle said.

Baum is in his second year at Iraan, a town a located “in the middle of nowhere-er … add that extra ‘er.’ I love this community. Just good people.”

So, the town rallying after tragedy perhaps was not expected. But the extended support of towns near and far was overwhelming, he said.

“The biggest thing is that you don’t have to be against Wellington to be for Iraan,” he said amid signs that read “The strong. The courageous. The Braves.” “This is amazing.”

And Wellington fans, while wanting to win the game and return to the championship game the Skyrockets won in 2013, were all for Iraan, a state champion 20 years ago.

“It has been very welcoming,”  Wellington cheer sponsor Deidre Kane said of the pre-game meal. “They were in our thoughts and prayers. It was such a tragedy. But when it’s game time, may the best team win.”

Kiara Hodge, center and Dahlia Butchee laugh for a moment as they get their food during a benefit dinner (Photo: Ronald W. Erdrich, Abilene Reporter News)

A scholarship fund was set up at Wellington High and at halftime of the game, Skyrockets cheerleaders presented a check to their counterparts at Iraan High. A total of more $3,000.

But there was a game to play, to see which team would make its second finals appearance in school history.

A message of thanks from the Iraan-Sheffield School District was read of the public address system before kickoff. The community has been “blessed beyond measure” by the outpouring of support, it went. “We are united by love.”

Baum seemed almost close to tears talking about that love.

“As tragic as it is,” he said looking at the rows and rows of cheerleaders, “we’ve felt more of blessing out of it. There have been good lessons in this.” 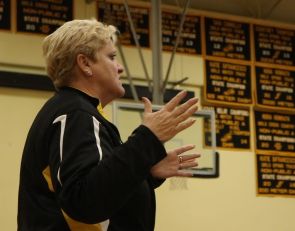 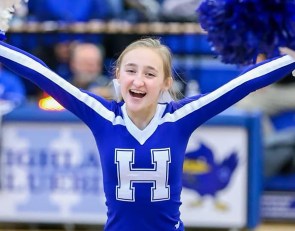 https://usatodayhss.com/2016/bus-accident-cheerleaders-iraan-texas
After tragic bus accident, cheerleaders from around Texas gather to lend support
I found this story on USA TODAY High School Sports and wanted to share it with you: %link% For more high school stories, stats and videos, visit http://usatodayhss.com.