Cape Henlopen’s Lindsay Monigle (9) with a shot on goal in the DIAA girls lacrosse championship game against Tower Hill at Wesley College in Dover.

Cape Henlopen’s Alia Marshall (16) runs down the field during the second have of play in the DIAA girls lacrosse championship game against Tower Hill at Wesley College in Dover.

Cape Henlopen’s Jody Boyer (24) runs down the field in the DIAA girls lacrosse championship game against Tower Hill at Wesley College in Dover.

DOVER – PJ Kesmodel’s 73rd birthday went exactly how he hoped it would.

The Vikings gradually pulled away from Tower Hill to win 16-4, running their in-state winning streak to 99 games. Then they sang “Happy Birthday” to their coach as Wesley College’s Scott D. Miller Stadium.

“We all were talking on the field, trying to win it for him,” said junior Cailey Thornburg, who led the Cape attack with four goals. “Get him a birthday wish.”

The top-seeded Vikings completed a 17-1 season, the only loss coming to powerful St. Mary’s of Maryland. Third-seeded Tower Hill (14-4) stayed close early and got six saves from spectacular goalkeeper Ellie Wakefield, but ultimately proved to be no match.

The teams traded goals over the first 12 minutes, with Evelyn Shoop’s score giving Cape the first two-goal lead at 4-2. Abby Manning answered for the Hillers, but the Vikings scored three times in the final 3:19 of the half. Shoop, Lizzie Frederick and Thornburg did the damage to push the halftime lead to 7-3.

“We blew a bunch of shots,” Kesmodel said. “We were getting the draws, and that was critical. I figured if we started making some shots, which we did, we’d settle down and be OK.”

The Vikings were more than OK. They held Tower Hill to just one shot in the second half, and used a tried and true tactic to score the last eight goals of the game.

“We went to the classic spread yellow,” Kesmodel said of the offensive set that controls possession and forces defensive aggression. “… They had to come out and play us, and we scored. That broke the game open. We’ve done that for years.”

Frederick had eight goals and six assists in a 20-7 semifinal win over Caravel, so the Hillers guarded her relentlessly in the final. That left openings for others, and the Vikings’ 16 goals came from 10 different players.

“I kind of knew that was going to happen after the game I had on Thursday,” said Frederick, who still managed two goals and an assist. “I knew they were going to try to take me out of the game as much as possible.

“It ended up backfiring on them, because everybody else just stepped up. I knew that was going to happen, because I have total faith in my girls. They would literally do anything to win, and they’re just as skilled as me.”

Kesmodel agreed, saying this was his most talented Cape team in nine years as coach.

“There are like five legitimate, really good Division I players on this team,” the coach said. “… We have four or five great athletes on this team. We’ve never had that kind of combination before.

“If you get them to play well and on the same page, it’s going to work out well.”

It did, thanks to a relentless approach.

“Last year, I felt like we played not to lose,” Frederick said. “But this year, we played to win.”

Kesmodel’s retirement has been rumored after each season, but he made it official this time. Family, friends and former players flew in from around the country to witness his final game.

His first Cape team lost in the state semifinals in 2008. The last loss to a Delaware opponent came against St. Andrew’s on May 2, 2009. Nineteen days later, the Vikings won their first state championship.

It has been nothing but titles since.

“This is what I was hoping for, to go out on top,” Kesmodel said. “It doesn’t usually work out that way. But it did, thank God.” 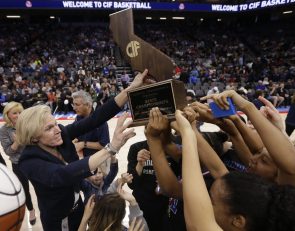