Class of 17: No. 17 Cullman (Ala.) slugger Owen Lovell gets respect

Class of 17: No. 17 Cullman (Ala.) slugger Owen Lovell gets respect

USA TODAY High School Sports is publishing a series called “The Class of 17,” highlighting 17 members of the Class of 2017 whom we will be watching in the coming year, beginning with No. 17, Cullman (Ala.) outfielder-pitcher Owen Lovell. The athletes were selected by the USA TODAY HSS staff. 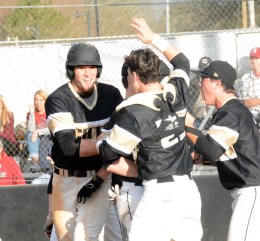 “He’ll hit a ground ball in the six hole that gets to the fence,” Patterson said. “It will carry off his bat like I’ve never seen before. I get a little bit nervous when our guys are taking ground balls on his BP.”

Lovell, an outfielder-pitcher, committed to Alabama early in the fall of his sophomore year, when he was only 15. This past season, as a junior, he was a second-team American Family Insurance ALL-USA selection and won the Alabama Mr. Baseball award, hitting .392 with 15 homers and 64 RBI and going 7-1 with a 1.51 earned-run average and 63 strikeouts in 51 innings as a right-handed pitcher.

What makes Lovell a unique athlete is at 6-5 and 225 pounds, he has plenty of power yet is quick and agile enough to be a big factor in the outfield or as a free safety for the Bearcats’ football team. He made a spectacular diving catch to rob Hartselle’s Austin Parker of a potential game-tying double in extra innings on April 15 that helped propel Cullman into the playoffs.

“I’ve always worked on my quickness and my speed,” Lovell said. “I can move around a little better than most 6-5 guys.”

“Big-time players make plays like that when the game is on the line,” Patterson said.

When Greg Goff became the new Alabama baseball coach in mid-June, one of the first people he contacted was Lovell to make sure the then-junior was still on board with the Crimson Tide.

“He called me pretty early,” Lovell said. “I liked him. I didn’t have any second thoughts about committing.”

Lovell was named the MVP of the Perfect Game East Cobb Invitational in Marietta, Ga., this summer after he went 9-for-18 with three homers, seven runs and eight RBI in the event for the Georgia Jackets.

Lovell is known and feared by opposing teams. As a freshman, he was the 5A Hitter of the Year, with a .436 batting average, 14 home runs, and 64 RBI. While recovering from a broken leg as a sophomore, he still managed to hit .394 with 12 homers and 61 RBI to help lead the Bearcats to the 6A state title. Teams have frequently tried to pitch around him.  This past season, he was intentionally walked by the No. 1-ranked 7A team, Sparkman (Harvest) — with the bases loaded.

“I had a good number of walks (36) this year,” Lovell said. “Coach Patterson really worked with me, about taking walks and not being selfish. I think I got better at that this past year.”

“He’s getting some respect that you don’t see very often,” Patterson said. “Like Barry Bonds at the high school level.

“Last year, he really matured from his sophomore year and is beginning to understand when to expand his strike zone, when there are runners on and then there are times when he should take his walks. It is amazing how few good pitches he sees.”

Though he has long arms, Lovell likes to crowd the plate when he hits, making it harder for pitchers to throw him away.

“I have quick enough hands where I don’t get thrown inside much,” Lovell said. “Teams usually try to go away on me.”

Patterson said while he’s counseled his player to take a step back in his stance, Lovell’s ability allows him to get power even without extending his arms.

“We’ve talked about extending his arms a little bit, but for now, that’s where’s he’s comfortable,” Patterson said. “He’s a special guy where he can let the ball get extremely deep and the ball jumps off his bat. He doesn’t have to extend his arms like a lot of guys do.”

https://usatodayhss.com/2016/class-of-17-cullman-ala-slugger-owen-lovell-gets-respect
Class of 17: No. 17 Cullman (Ala.) slugger Owen Lovell gets respect
I found this story on USA TODAY High School Sports and wanted to share it with you: %link% For more high school stories, stats and videos, visit http://usatodayhss.com.