Leading up to what has historically been a pivotal game for the Desert Valley League title the last 10 years, Palm Springs football coach Dan Murphy continued to remind his young, inexperienced squad that anyone wanting to steal away their league title was going to have to come through the Indians to do it.

La Quinta, this year’s virtually unanimous favorite in the DVL, did just that Friday night but it wasn’t easy. After a sloppy first half where the Blackhawks controlled much of the time of possession and momentum, including multiple trips inside the Palm Springs’ 30-yard line without points, La Quinta hunkered down and did what they do best: Bleed the clock with a power running game and score just enough points along the way to win, which they did, 14-10.

“What was frustrating in the first half was having the ball on their side of the field the whole night and not coming away with any points,” said La Quinta coach Dan Armstrong. “I felt like we were the better team, but we weren’t playing that way. I told our guys we were going to come out double tight (ends) and get physical and see if they could stop us, and they couldn’t.”

Maybe a better way to put it: Palm Springs couldn’t stop senior tailback Benji Cordova, who amassed 225 yards on 33 carries and the two decisive second half touchdowns. Time and time and time again in the final two periods, the Blackhawks set up in the offset-I formation or some semblance of a power run attack, and Cordova would muscle up the middle, soon hitting contact, but his unparalleled drive and leg strength kept motoring him forward.

In the second half alone, he totaled 20 rushes for 151 yards with only two rushes of less than four yards.

“We knew Cordova would get the ball a lot. He’s a great back and ran hard,” Murphy said. “We were in a position a lot of the time but just couldn’t make the tackles. With his desire and ability, and some of it had to do with us not being able to wrap up and tackle, we knew it would be a tough game.”

But in the first half, the Indians were able to manage. On La Quinta’s first two drives, including one resulting from a Jeremy Dotson interception by Adam Kasten, the Blackhawks drove within Palm Springs’ 30, but a bungled high snap and unsportsmanlike conduct penalty stalled both.

After Damion Lee intercepted La Quinta quarterback Andrew Garcia, followed by a trade of punts, a trio of three quick plays – a 39-yard catch and 10-yard run by Josh Barlow and a 13-yard scamper by Nick Reyes-Foster – set up a one-yard touchdown run by Dotson put the Indians on the board.

Palm Springs quarterback Jeremy Dotson lands in the end zone for a touchdown in 2nd quarter against La Quinta on Friday, September 30, 2016 in Palm Springs.

A costly tipped ball-turned-interception hauled down by Donovan Russell gave the Indians the ball in the red zone once again late in the first half, but a holding penalty inside the five-yard-line forced a 35-yard field goal, made by Leonel Munguia.

Missing those four points would be costly, though, but in the locker room ahead 10 points, Murphy had to remind his players the game was far from over.

“I think the kids got a little excited,” he said. “They played a good first 24 minutes and just couldn’t get anything going offensively.”

After the game, both teams met at midfield for the presentation of the Mike Gates Memorial Trophy, honoring the late teacher who was a part of both schools during his tenure before he passed away in 2011. Since, the teams have played for a plaque commemorating him and putting more on the line for this unofficial rivalry game. Over the six years, the teams have split three-each, and in the teams’ 22 meetings historically, they’re tied 11-apiece. In the end, it could decide the winner of the DVL title, like it has every year since 2006.

Palm Springs Frankie Kidd picks up a La Quinta fumble in the last seconds of the first half on Friday, September 30, 2016 in Palm Springs. 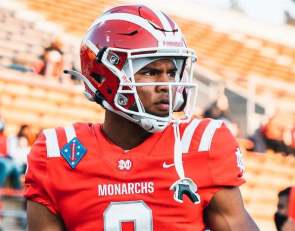 https://usatodayhss.com/2016/cordova-powers-la-quinta-in-comeback-win
Cordova powers La Quinta in comeback win
I found this story on USA TODAY High School Sports and wanted to share it with you: %link% For more high school stories, stats and videos, visit http://usatodayhss.com.