Hobbs recovered a fumble for the defense as the Bulldogs trounced Ballard, 31-13. The win was the Bulldogs 23rd consecutive in the regular season and 17th straight win dating back to last season.

“Any time your defense scores twice, that’s a rare event,” Male head coach Chris Wolfe said. “It’s more often than not that you’re going to win (with two defensive touchdowns). We played poorly on special teams, and those two defensive plays saved that.”

Male held Ballard to just 210 yards of total offense. In the first quarter, Robert Sheffield returned an interception 25 yards for a score, and in the third quarter he returned a fumble 85 yards to the house.

“Hobbs had the momentum-changing 85 yard fumble recovery at the end of the third quarter” Wolfe said. “Ballard were down at the 15-yard line, they had momentum and really had a chance to get the game pretty tight.”

Through two games, Male remains unbeaten, but according to Wolfe, the offense is still getting adjusted to their roles.

“I think the defense has been strong and we need to tackle a little better,” Wolfe said. The offense is still a work in progress. We had an interception this week, so I’m not happy with that, but it’s just a learning process. We’ve got 11 new starters on offense and we’re working towards being ready for the playoffs.

We really haven’t expanded (the offense) any, we probably shrunk it down a little to be honest. We’re trying not to turn the ball over and put our defense in a bad spot. We have nine seniors starting on defense so we feel like that’s our strength.” 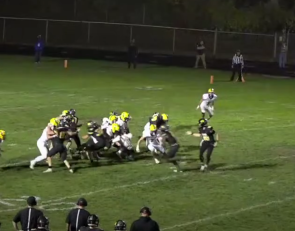 https://usatodayhss.com/2016/defense-leads-male-to-victory-over-ballard
Defense leads Male to victory over Ballard
I found this story on USA TODAY High School Sports and wanted to share it with you: %link% For more high school stories, stats and videos, visit http://usatodayhss.com.