Desert Hills' Nephi Sewell makes the most of his second chance

Desert Hills' Nephi Sewell makes the most of his second chance

Making big plays isn’t new to Nephi Sewell who continues to be a human highlight machine for the Desert Hills football team.

Desert Hills’ Nephi Sewell suffered a season-ending neck injury last year, but has since made an amazing comeback to lead his team into the 3AA Playoffs this season.

The 6-foot, 185-pound senior rushed for 163 yards and a touchdown to help lead the Thunder to a 28-14 victory over Snow Canyon at home on Friday. The win was extra special for the Thunder who got revenge after the Warriors knocked them out of the playoffs last year. Friday’s victory was the program’s seventh in its last eight games and gave Desert Hills the No. 2 seed in the upcoming 3AA Playoffs.

After missing the first three games due to an arm injury, Sewell has made up for lost time as he’s rushed for 691 yards (10.8 yards per carry) to go with seven touchdowns and has eight catches for 146 yards and a score. The two-way player also returned an interception for a touchdown against Cedar earlier this season.

“He’s the best player on the team, and he’s a lot of fun to watch,” Desert Hills head coach Carl Franke said. “He’s one of our leaders, everyone trusts him and he makes everyone around him better.”

But despite all the success he’s had over the past four years, Nephi’s journey hasn’t been easy after multiple injuries nearly forced him to quit playing football altogether.

Desert Hills’ Nephi Sewell suffered a season-ending neck injury last year, but has since made an amazing comeback to lead his team into the 3AA Playoffs this season.

A way of life

Football isn’t just a game for the Sewell family, it’s become a way of life.

Nephi’s dad, Gabriel Sewell, was a football coach at Faasao Marist High School in America Samoa and regularly brought his sons to practice.

“We were always around the team and hanging out with the players at practices,” Nephi recalled. “It was a cool experience being around those guys because we looked up to them. I’ve always loved football, but during this time it really lit a fire under me to become the best football player I could be.”

Nephi’s older brother, Gabriel Sewell Jr. — a starting linebacker for the Nevada Wolfpack who is that team’s third-leading tackler — remembers a lesson his dad taught him during one of those practices.

“When I was in seventh grade, he was making me go up against seniors,” Sewell Jr. told the Reno Gazette-Journal. “I swear one of them didn’t have a birth certificate and had two kids already. … Whenever I got whacked, my dad would laugh at me. I figured I had to buckle up. There was no hiding. It toughened me up a little bit.”

After living in America Samoa, the Sewell family ended up moving to St. George five years ago.

“We loved it over there, but St. George has just been awesome,” Nephi said of the move. “We’ve met so many great people here and the community had done so much for me and my family. It really is home for us.”

Desert Hills’ Nephi Sewell hits a Jordan receiver during the first series of the game Friday, Aug. 21, 2015. The hit would be the season ending play for Sewell after damaging his vertebrae and needing emergency surgery.

The community support was on full display after an accident last year nearly left Nephi paralyzed and unable to play football again.

Seconds after delivering a hard hit on the fourth play of the game against Jordan (5A) to open the high school football season last year, Nephi was lying motionless on the field.

With it being the first game of the season, and with all of the adrenaline going through his body, the defensive back was able to walk off the field. But by the time the third quarter rolled around, Nephi was rushed to the hospital where he ended up getting surgery the next morning to repair his broken neck.

The surgery was successful, but it also meant that his junior season — arguably the most critical year during the recruiting process — was over.

“That was so tough,” Nephi said of the recruiting and rehabilitation process. “I’ve always been so active playing sports and stuff, and to doctors tell me that I had to stay in bed for several months wearing a neck brace was one of the toughest things that I had to do.”

“The support from the community has been overwhelming and shows that there is more to life than just football,” said Gabriel. “Football is a platform that brings people together and this community is a prime example of what it means to come together.”

Desert Hills’ Nephi Sewell begins the long road to recovery after his season was cut short by a spinal injury sustained during their game against Jordan High. Friday, Sept. 4, 2015.

Coming into his junior year, Nephi was rated by many recruiting services as one of the top prospects in the state of Utah for 2017.

But after missing all of last year due to his injury, Nephi dropped off the list of many college head coaches.

With how competitive the college landscape has become, oftentimes when a player sustains a serious injury, coaches simply move on to the next player.

But that wasn’t so with Weber State.

The Wildcats, who had already offered Nephi a scholarship before his accident, told Franke that his scholarship would still be there whether he played football for them or not.

Desert Hills’ Nephi Sewell suffered a season-ending neck injury last year, but has since made a comeback to lead his team into the 3AA Playoffs this season.

“The coaching staff called me right after Nephi had surgery and told me that they were going to still honor his scholarship if he wanted to come to Weber State,” he said. “I was really blown away by it. It was really a touching gesture and a very classy move on their part.”

“That meant a lot to me because I saw several coaches and teams pass on me after my accident,” Nephi said. “I get it, and it’s nothing personal, but to see them (Weber State) hold their word, even knowing that I might not even be able to return to the football field again, was pretty special.”

Sitting in the hospital room, Nephi could only think of one thing: playing football again.

So after months of hard work and rehabilitation, Nephi went in to see his doctor to see how the progress was going.

“I was really nervous going in because I didn’t want to get some bad news which would postpone my return and not allow me to go to all the summer camps,” he recalled. But the doctor ended up clearing me and it was one of the happiest moments of my life. I probably gave him the biggest hug of his life.”

Two weeks later, Nephi was in Salt Lake City for the All Poly Camp, one of the biggest summer football camps in the country where a number of Division I head coaches were in attendance.

I didn’t do any hitting the first day, and the plan all along was just to do some drills to show the coaches that I still got it,” Nephi recalled. “But of course me being me, I couldn’t wait and I had to start hitting. So on the second day of the camp, I asked my dad If I could puts the pads on and even though her was nervous, he said I could test it out. I started hitting and everything felt great, and I’ve been doing it since.”

The following month, the Desert Hills football team held a 7-on-7 football camp. And although Nephi was cleared, coaches continued to stress for Nephi to take things slow and go about 70 percent and not full speed.

“I remember the coaches telling Nephi to go 70 percent, but there isn’t just 70 percent in Nephi. Everything he does is 100 percent, and he doesn’t take plays off,” quarterback Quinn Kiser said.

Desert Hills’ Nephi Sewell makes an interception and returned it for a touchdown in a game against Cedar earlier this season.

Grateful for his second chance

During his recovery, Nephi stumbled upon a scripture that he pinned at the top of his Twitter account which reads: “Don’t be afraid, for I am with you… I will strengthen you and help you. I will hold you up with my victorious hand.”

“I love that scripture because I was going through such a rough time,” he said. “Before I got injured, I had my goals and what I wanted to do and accomplish. Then when the injury happened my goals were changed. So I flipped through the scriptures and stumbled upon that verse, and it hit me pretty hard. I trusted in him (God) that this was his plan for me. What he saw for me was bigger than what I saw for myself, and that’s why it means so much to me.”

"Dont be afraid, for I am with you.. I will strengthen you and help you. I will hold you up with my victorious hand" pic.twitter.com/D9ziVnhOOv

That perseverance has paid off for Nephi who’s had a breakout year after sitting out the first three games due to another unrelated injury.

In his first game back and on his very first play, the senior speedster caught a ball over the middle and then took it to the house for a touchdown in a 50-0 victory over Grantsville on the road.

After crossing the goal line, Nephi couldn’t help but smile.

“When I scored, the first thing that came to my mind was that it was good to be back,” he said smiling.

After missing out on playing with his younger brother Penei last year, Nephi is grateful that he’s healthy and now gets the opportunity to play with two of his brothers this year.

Desert Hills’ Nephi Sewell celebrates after scoring a touchdown off an interception against Cedar earlier this year.

“It’s hard to put into words, but it’s just been amazing to have him on the field again after all he’s went through. He’s a real playmaker and just a person we can always count on when we most need a big play.

When asked if he has any nicknames for his brother, Penei smiled and said that he calls Nephi “NSS” which stands for “Nephi Special Sewell.”

“He definitely makes me look good out on the field so I owe him a lot. It’s a great blessing to have him out there playing this year, and hopefully we can end it the right way as state champions.” 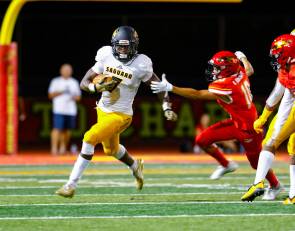 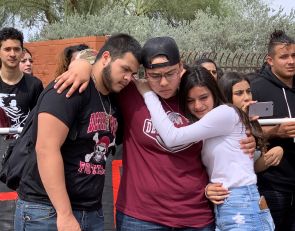 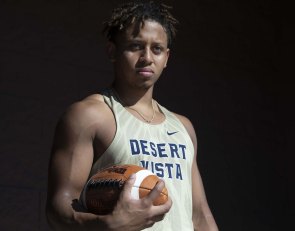 What happened to the 3-sport athlete?

https://usatodayhss.com/2016/desert-hills-nephi-sewell-makes-the-most-of-his-second-chance
Desert Hills' Nephi Sewell makes the most of his second chance
I found this story on USA TODAY High School Sports and wanted to share it with you: %link% For more high school stories, stats and videos, visit http://usatodayhss.com.