FOWLERVILLE – Donovan Tarn has been part of teams that have reached the state semifinals and quarterfinals.

The DeWitt senior wants to accomplish even more.

And Tarn played a role in giving the Panther baseball team a shot to do just that Saturday.

Tarn earned a pitching win and delivered the game-clinching RBI while helping DeWitt to a 12-2, five-inning mercy-rule victory over Portland in a Division 2 regional final at Fowlerville.

The win gave the Panthers their third consecutive regional title and sends them into Tuesday’s 1 p.m. quarterfinal at the University of Michigan against Ann Arbor Gabriel Richard.

“It’s special,” Tarn said. “We went back-to-back-to-back. That’s so rare to do in any sport – to win three regional titles in a row. It’s honestly crazy. I never could (have) expected it. I’m just so proud of our whole team. It was unreal.”

“We’re all very proud that we got this far,” Stygles said. “It’s very, very fun winning all these games this late in the season and I hope we keep doing it.”

Tarn’s day on the mound was about to be over after the Panthers held a 5-2 lead heading into the bottom of the fifth. But the DeWitt bats came to life and made it not necessary for the game to continue beyond the inning.

The Panthers exploded for seven runs in the bottom of the fifth with Tarn’s leadoff double kicking off the inning. After the Panthers batted through the order, Tarn’s hit in the gap ended the game, plating Mark Connelly with the clinching run.

Trevor Kapp, Nolan Knauf, Stygles and Connelly also drove in runs during the seven-run fifth for the Panthers.

“Really all day we hit the ball well,” said DeWitt coach Alan Shankel, whose team opened the regional with a 2-1 victory over Eaton Rapids.

“Eaton Rapids made some tremendous defensive plays on us and kept us from really getting out. We’ve been hitting the ball pretty well all year and I’m just happy that we could break loose there in the fifth.”

The Panthers are now two wins away from playing for a state title and Tarn is trying to do all he can to get that opportunity.

Portland, the CAAC White champion, reached the regional final with a 6-1 victory over Fowlerville.

Mark Brooks, Treyvin Groesser and Haydin Brandt each drove in two runs, while Trevor Trierweiler struck out 10 in the semifinal win for the Raiders. 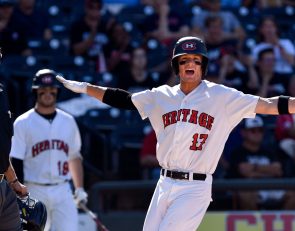 https://usatodayhss.com/2016/dewitt-baseball-gets-regional-threepeat
DeWitt baseball gets regional three-peat
I found this story on USA TODAY High School Sports and wanted to share it with you: %link% For more high school stories, stats and videos, visit http://usatodayhss.com.