EAST LANSING – Andrew Manier fired a three-hitter, but his fastball and curveball had to take a backseat to his … hair.

It had to be the hair.

“All us guys were trying to think of something to kind of bond us together even more than we already are,” Manier said. “Some kids bleached their hair. I thought to dye it red instead of just bleaching it. I’m just here to have fun, and this is one way of showing that we’re having fun and that we’re crazy.”

He was crazy good on the mound as Sterling Heights Parkway Christian defeated Centreville, 5-1, in a Division 4 semifinal game this morning.

Manier walked two and struck out five. Two of the three hits — and the only run — didn’t come until the seventh inning.

“There was just something that he locked in, he blurred everyone out and he just pitched his game, and it was something memorable,” said Parkway catcher Alex Julio. “I’ve never seen it before from him or, actually, any pitcher I’ve caught. Everything was on. His off-speed was on; he could locate anything. It was almost like he was a sniper. It was crazy.”

For the second straight game, Parkway (22-11-1) scored four runs in the first inning. The first came when Montana Essian laid down a perfect suicide squeeze.

“The first inning has been huge in all of our playoff experiences,” Essian said. “We started every one off with a bang and kind of set the tone for the game.”

The victory improved Manier to 8-2, and he has been a godsend to a rotation that includes Riley McManus, who missed part of the season with an injury, and Pierce Banks.

Manier flirted with a no-hitter into the middle part of the game, which caused a stir in the dugout.

No-hitter or not, Manier was able to zero in on Julio’s glove and, for most of the day, it looked like the two were playing catch as the hitters from Centreville (28-4) struggled.

“The fastball was really working, tailing away on a lot of batters,” Manier said. “They had three or four lefties in the lineup, which I love — pitching against lefties. I was successful working the curveball, keeping it down with a good bite on it and locating with my fastball really well.”

But you can forget about his fastball and curve. The real story was his hair.

“Oh, well,” he said, laughing. “I just wanted to do something crazy to show that we’re all in, and that’s our motto for this year: all-in. What shows it better than dying your hair the team colors? YOLO!”

That is YOLO, as in “you only live once.” 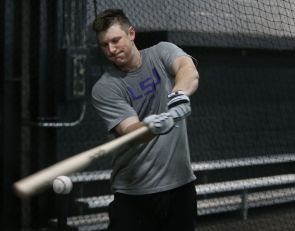 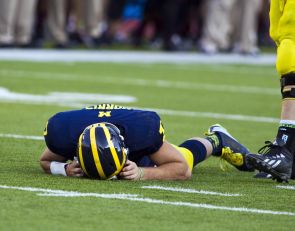 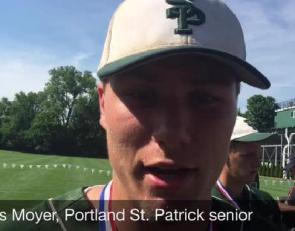