EUCLID, Ohio  – The Euclid High School Panthers had more than a win on their minds as they played their Homecoming game against Strongsville Friday night. The team played for the first time since the death of beloved teammate Andre Jackson.

Andre Littlejohn watched the game his son was supposed to play in.

“Such a great kid. I’m gonna miss him very much,” said Littlejohn.

Instead, Littlejohn saw hundreds of Euclid community members honoring his son. A balloon release and a moment of silence were held before the game.

“The guys are pretty broken up about it. You can just tell by the whole mood in the locker room,” said Steve Shubert, a resource officer at the high school.

“He probably came to my office every day, probably for two years,” Shubert said, pushing back tears.

He described the 17-year-old junior the same way as everyone else did.

“Smiling. He never had any enemies. Everybody liked him,” he said.

Andre’s popularity made his sudden death even more shocking. An injury on Friday September 23 during an away game with Solon sent him to the hospital. He died Sunday from a bowel laceration, blunt force to the abdomen.

The team carried “Dre” with them as it played its homecoming game, wearing special uniform patches and helmet stickers.

“He’s up there smiling right now sitting next to God. He’s watching the game. I know he is,” said Andre’s father.

According to the school district, a viewing will be held from noon to 6 p.m. Friday, Oct. 7 at Rogers Funeral Home at 8608 Quincy Avenue in Cleveland.

The funeral service will be held at 10 a.m. Oct. 8 Starlight Baptist Church at 14516 Euclid Avenue in East Cleveland. The family will receive visitors beginning at 9:30 am before the service.

The school district said that those who would like to make donations to help cover the cost of the arrangements are asked to please send check or money orders to Rogers Funeral Service (memo: Andre L. Jackson). 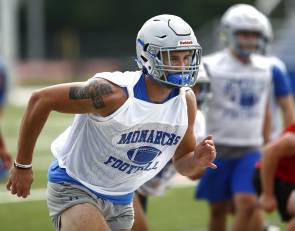 https://usatodayhss.com/2016/euclid-high-andre-jackson-homecoming-memorial
Euclid (Ohio) school remembers player who died after injury in game
I found this story on USA TODAY High School Sports and wanted to share it with you: %link% For more high school stories, stats and videos, visit http://usatodayhss.com.