MAMARONECK – The mighty Lakeland field hockey team has had a bit of a rough go of it lately.

On Oct. 9, the Hornets’ 84-game winning streak came to an end when they tied Darien (Conn.). On Saturday, the Hornets’ streak of being untied against New York teams since 2010 was halted when the Mamaroneck Tigers battled Lakeland to a 1-1 draw.

The last New York team to tie Lakeland was Putnam Valley. The Hornets, who have won seven straight state titles, haven’t lost to a New York team since 2008.

Mamaroneck’s Paige Danehy, left, and Lakeland’s Kelsey McCrudden battle for the ball during their game at Mamaroneck on Saturday.

“We had amazing players come through the Lakeland program,” Hornets senior Meghan Fahey said. “I think the pressure was built up so much over the years that we want to show who we are as a team individually this year. It’s a different team every year. I think we have something to prove this year and we’re ready to prove it.”

While you’d think Mamaroneck would be excited, coach John Savage had a different take.

“I tell the kids every game is important,” Savage said. “Whether you play the best team or the worst team, we need to win as many games as you can. Our program has stepped up in the last couple of years, which is why we believe we can play with anyone.

“We were fortunate in the game. They played extremely well.  Am I excited that we got a tie? I’m excited we got a tie because we need it for the seeding. When we play Scarsdale on Monday, that may very well be, depending on what other teams are doing, for the number one seed and definitely for our league championship. I’m ecstatic we got the tie. I would’ve loved to win and I love playing Lakeland because they’re one of the best in the state.”

The Hornets got on the board late in the first half with Fahey scoring off a feed from Cali Cortese, who initially took the pass from Kelsey McCrudden.

“I think our team has worked really hard all year on corners,” Fahey said. “I think it’s a big focus for the rest of the season. Kelsey took a nice shot, Cali got a stick on it, passed it to me and I put it in. I think if we keep it simple like that – I know it may sound simple, but if we do that, it’s going to help us.”

About 10 minutes into the second half, the Tigers were able to get the equalizer on a corner as Sophie Brill scored off an assist from Paige Danehy.

“On the corner, it’s been my position all season to be on the post,” Brill said. “I’ve been working really hard in practice to get that deflection and it came my way.”

Lakeland goalie Cassie Halpin blocks a shot with Mamaroneck’s Sophie Brill bearing down on her during their game at Mamaroneck High School on Saturday.

With both teams being defending state champions in their respective classes (Lakeland in Class B, Mamaroneck in Class A), this game became a litmus test for both with the Section 1 tournament beginning next week.

“We’ve been improving all season,” Brill said. “Every time we get on the field, it’s a game we have to get better in. We left it all out on the field.”

Player of the game: Mamaroneck senior Charlotte Mackie made 12 saves, leading the Tigers’ defense and keeping them in game so they could get the equalizer in the second half.

Turning point: In the second half the Tigers were able to fix their mistakes on offense and keep Lakeland off the board.

Stat line: Lakeland had 16 corners and Mamaroneck had five.

Quotables: “We played as hard as we could,” Cortese said. “I don’t think this tie will determine the rest of our season.”

Mamaroneck goalie Charlotte Mackie protects the goal as teammate Emily Mahland and Lakeland’s Juliana Cappello try to control the ball during their game in Mamaroneck, Oct 15, 2016. 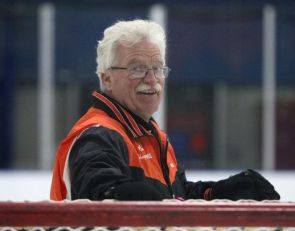 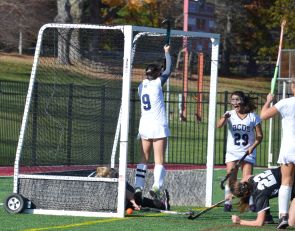