The Wolves, the Arizona 6A champions who won their final 11 games, were led offensively by Oregon State running back commit TJ Green, who rushed for 183 yards and two touchdowns.

“This was an absolutely fantastic experience for us here, everything first class,” Chandler coach Shaun Aguano said. “I hope that other states buy in to this. Overall, this has been the most incredible experience for our kids, coming from Chandler, playing in a facility like this and being taken care of.”

Chandler scored on the game’s opening possession as Romney caught the first of two touchdown passes from Conover to take an 8-0 lead with a two-point conversion. Chandler then punted on three of its next four drives, fumbling on the other possession.

Valdosta (14-2), the Georgia AAAAAA champion, scored on its second drive of the game, with Joseph Ingram catching a 15-yard pass from Josh Belton to cap a four-play drive that started on the Chandler 31. After a two-point conversion failed, Valdosta trailed 8-6.

After punting on their next possession, the Wildcats took their only lead of the game on a 26-yard field goal by Davis Baldwin with 11:41 remaining in the second quarter.

Chandler then scored on its next three possessions, two of those off Valdosta turnovers, to break the game open and take a 30-16 lead into halftime.

“Yeah, it was really bad,” Valdosta coach Alan Rodemaker said of his team’s turnovers. “The (fumble on the) punt return was really bad. I really thought at halftime we were still in the football game. It was a big challenge for us anyway, but I felt like turnovers really swung it.”

Ryan Johnson’s 1-yard run with 5:46 remaining in the first half swung the lead back in Chandler’s direction at 16-9. On the Wolves’ next drive, which came after another Valdosta miscue, Aaron Howard caught a 32-yard pass from Conover, to cap a three-play, 44 yard-drive that took only 44 seconds.

Green burst through the middle for a 69-yard scoring run on Chandler’s next drive to make it 30-9.

“I want to give a shout out to my O-line because they make the holes for me and I just hit them,” Green said. “Once I saw a crease, I just hit it and it was all because of them.”

Valdosta answered on its final possession of the first half when Jontae Baker caught a 12-yard pass from Belton with five seconds remaining before halftime. The Wildcats marched 72 yards in 10 plays over just 2:33 to cut the Chandler lead to 30-16 at the break.

“It was a good momentum swing,” Belton, who threw for 179 yards and two touchdowns, said of scoring right before halftime. “We just wanted to execute our drive before we went in at halftime. Coach told me what to do and I tried to execute.”

However, any hope Valdosta had of cutting into that lead further to start the second half evaporated on the opening kickoff as Chandler kicked it short and recovered the ball at the Valdosta 48.

And Chandler capitalized immediately, with Romney and Conover hooking up a second time, this one for 48 yards in a one-play drive that spanned just eight seconds.

“I have one of the best sophomore quarterbacks in the country throwing me the ball, so it’s easy to get open and have a perfect ball there every single time,” Romney said of Conover.

After Chandler punted on its next two possessions, Green broke free again for another long scoring scamper, this one from 57 yards to make it 44-16 with 1:31 remaining in the third quarter.

Valdosta punted on its first four second-half drives and threw an interception on its fifth possession, but the Wildcats rallied for a late touchdown when Valdosta’s other quarterback, Hunter Holt, scored on a 24-yard run with 5:36 remaining in the game. Holt also scored on the two-point conversion to make it 44-24, which ended up as the final score.

“For a coach that never wanted a two-quarterback system, we’ve done a good job playing with both quarterbacks all year,” Rodemaker said. “(Holt) had a nice little run. I was happy for him because I thought it would be Josh’s night all night. We didn’t know if Holt would be able to play or not (because of a shoulder issue).” 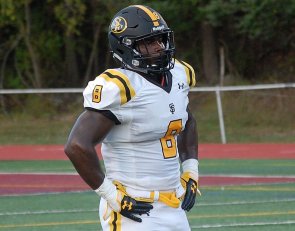 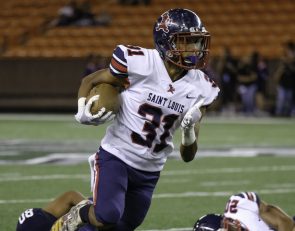 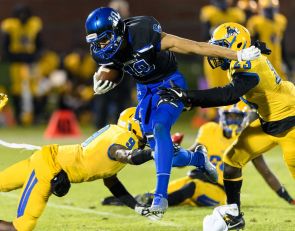