The Pirates and general manager Neal Huntington have certainly been busy so far this off-season. The signing of multiple players to help in the lineup and in the pitching department defiantly gives Hurdle some depth heading into the 2016 season. However, the team has yet to make any major acquisitions and in an off-season that has seen the Cubs bring in Jason Heyward, Ben Zobrist, and John Lackey and the Cardinals sign starting pitcher Mike Leake and involved in discussions with Heyward before he signed with the Cubs and also involved in talks to sign ace David Price before he signed with Boston, it’s only a matter of time before they bring in a star player. The Pirates need to make a major move before Spring Training if they are looking to compete. Not saying the players they have brought in are completely useless, but they need a proven player to compete with division rivals.

Probably the most notable transaction of the off-season for the Pirates, which featured the organization sending the “Pittsburgh Kid” to New York in exchange for starting pitching depth. This move sparked all sorts of reactions. Some fans understand the move, while others are mad at the fact management could trade a hometown player. Walker is one of the most productive second baseman in the league. Last year, he hit 16 home runs and had 71 runs batted in while supporting a .269 batting average. Trading away that production in return for a 5th starter at best is ridiculous in my opinion. Walker is easily one of the Top 5 at his position. The only way this deal will prove worthwhile is if Neise can learn a thing or two from pitching coach Ray Searage, who has a track record of turning around struggling pitchers (i.e. Francisco Liriano). If that happens, the deal will be end up being great for the Bucs. But as of now, the return the Pirates could’ve been better.

The Pirates missed out on a good opportunity here. Happ completely turned himself around when he came to Pittsburgh at the trading deadline last summer. His ERA with Seattle was 4.64 and his ERA dropped to 1.85 with the Pirates. This whole situation is similar to Edison Volquez. Volquez was signed in hopes he could regain his former glory, and did to some extent. The Pirates did not resign him once his contract expired after a good year and he signed with the Royals. Volquez would go in his first season with the Royals and make multiple postseason starts. I feel confident in saying the same situation will happen with Happ. Neise will fill in Happ’s previous role as the left-handed starter. Neise is being paid 9 million this year. Happ is being paid 10 million. Why would the Bucs choose Neise over Happ, when the Pirates have seen Happ pitch specifically for them and has had success? Not good thinking by Huntington.

By signing Juan Nicasio, the Pirates made a silent, above-average addition to the bullpen. Nicasio worked out of the bullpen for the Dodgers last year and had a 3.86 ERA, while also averaging 10 strikeouts per 9 innings. He also saw his average fastball velocity jump from 92 mph to 95.1 mph. This was a great addition for the Bucs, signing a 29-year-old hard thrower seems like a good buy.

This signing doesn’t make much sense. Vogelsong is 38 years old and has a fastball that is lucky to reach 91 mph. Vogelsong has not had a season ERA below 4 since he posted a 3.37 ERA in 2012. The Pirates need to invest in quality talent that will help the team down the stretch. Vogelsong will be lucky if he still has a job come July.

This past season marked his last with the Pirates for Pedro Alvarez. There were certainly some memorable moments created from the bat of Alvarez, but there were forgettable ones made with his glove. It was proven fact that throughout most of his time in Pittsburgh, Alvarez struggled mightily defensively. The power was always there for Alvarez, but his batting average and defense were the two things that made the Pirates contemplate trading him multiple times during his tenure with the Bucs. Overall, I think the team had to get rid of Alvarez at some point as he is too unpredictable and inconsistent. But the team needs to focus on regaining a power bat through free agency as they have lost over 40 home runs combined with the departure of Alvarez and Walker. If they can acquire a bat that is nearly equivalent to Alvarez in terms of home runs and has a slightly better average, this move is great. But if the team is hoping Jaso (Alvarez’s left-handed replacement) to put up high power numbers, it just won’t happen and Alvarez’s bat will be greatly missed.

In mid December, the Pirates traded OF Keon Broxton and a minor league pitcher in exchange for Jason Rogers. This move is strictly for depth at 1st base. With the departure of Alvarez, the Pirates need some role-fillers. And Rogers supported good season stats, posting a .296 average, a .358 on-base-percentage, through 152 at-bats. So, he can prove to be a secret weapon off the bench for manager Clint Hurdle. However, he has limited major league experience as last year was his first full year in the majors.

Probably the most risky move of the offseason…signing John Jaso. GM Neal Huntington stated Jaso will mainly be splitting time with Morse at first base this year, which would be okay, if only Jaso had more experience at the position. He has only had 2 starts in his career at first base. We’ve seen the Pirates do this before, trying to convert other position players into 1st basemen. It’s been tried with Alvarez, which wasn’t all that successful. Also, it’s been tried with native third baseman Aramis Ramirez. Once again, it didn’t work. So what is Huntington’s solution? Bring in a player in hopes that the third time is the charm. I’m not expecting any different outcome with Jaso. Being Jaso is Alvarez’s left handed replacement, it’s a stretch that he’ll be able to put up the same type of power as Alvarez.

The most recent move by the Bucs saw them signing hard-thrower Neftali Feliz. Feliz was acquired by the Tigers last year. He saw an improvement in his ERA, going from a 7.62 to a 4.58. This is one pitcher signing that I am actually eager to see how turns out. I am optimistic about this move given the quality pitcher Feliz was when he first entered the league. Through his first 3 years in the league, his ERA for a season was never over 2.74. Considering he is only 28 years old, and with a little work from pitching coach Ray Searage, he can gain back the early career success he had. Questions now are starting to surface if this signing may spell the end for Melancon’s time in Pittsburgh as Feliz has closer experience. I feel Feliz would have more success pitching in the 7th inning, which sets up Watson for the 8th and Melancon for the 9th.

Canadian LLWS player says what everyone already knows: Pirates fans have given up because team stinks 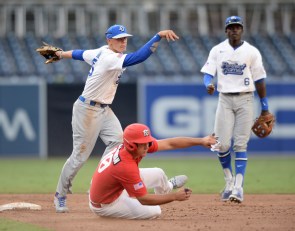 High school athletes taken in first round of 2019 MLB Draft 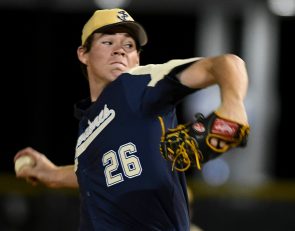 https://usatodayhss.com/2016/grading-the-pirates-off-season
Grading the Pirates Off-season
I found this story on USA TODAY High School Sports and wanted to share it with you: %link% For more high school stories, stats and videos, visit http://usatodayhss.com.