Athena quarterback Ta’von Granison gets past Brighton’s Shea McDonald on his way to a 71 yard touchdown run in the Class A final.

For years, the Greece Athena Trojans have been one of the teams to beat in Section V football.

And the Trojans kept getting beat, and always before winning a sectional championship.

Athena changed that Friday night, when they bridged a more-than-three-decades gap between Section V championships with a 35-14 win over Brighton in the Class A final at Rhinos Stadium.

“I feel great, I feel phenomenal, being able to come out here and do this for my coaches,” Athena senior quarterback Tavon Granison said. “We’ve been pushing, knocking on the door for three years and we finally got it done.

“We finally finished it, and it feels great.”

Greece Olympia (1997) and Greece Arcadia (1988) won sectional titles since the Trojans took the Class AAA championship — the equivalent of today’s Class AA title — in 1981. Now that’s history. The Athena Trojans (10-0), coached by Rob Cerone, are headed to the state regional round to face Buffalo Bennett of Section VI.

“The amount of joy inside of me right now over this (holding the championship trophy) — we’ve been working a long time, we’ve been working years, 35 years for this program to get here,” Kyle Benham said. “This is fantastic. I couldn’t have asked for a better team to play with.

“I love every single one of them. They played their heart out tonight and it definitely paid off.”

Granison helped push the Trojans there. The starting quarterback in Athena’s last two playoff losses at Rhinos Stadium — one in the 2014 sectional final — Granison had touchdown runs of 71, 47 yards and 52 yards, plus two touchdown throws. He did leave game during the fourth quarter, and his left arm was in a sling afterward.

“I’m not going to talk about it,” Granison said.

The Brighton Barons (8-2) put themselves in the conversation about Section V title contenders this fall with their best season since 1999. This was the Barons’ first appearance in a sectional final, and they lost to just one team on their schedule — Athena.

This championship game between Monroe County league teams was a rematch of Athena’s 28-21 win at Brighton on Sept. 30 of the regular season.

The Trojans scored on their second play from scrimmage. Granison quickly scanned the action in front of him during a running play, picked a hole and accelerated to his 71-yard touchdown. Brighton evened the score late in the first quarter.

Interception and return to #Brighton 29 by Speed gives @AthenaHigh ball back with 30 seconds remaining in half. pic.twitter.com/D3Frp7XHvd

The Barons moved 69 yards in 11 plays, including a run by Jason Cunningham that converted a 4th-and-1 at the Athena 11. Cunningham, who had 97 rushing yards on 32 carries, reached the end zone on another fourth-down play with 14 seconds remaining in the opening period.

Brighton hoped to move down field and score before halftime, but when the Barons reached the Athena 45, Speed intercepted a throw and returned the ball to the Brighton 29. Athena had 29 seconds to work with, and the Trojans took the lead after Granison connected on a 10-yard pass to Patrick Meisenzahl with nine seconds to play in the half.

With the Trojans ahead 14-7, Granison spun off of defender and hustled just out of reach of Brighton defenders during his 47-yard touchdown run with 10:59 remaining in the third quarter. That helped give Athena a 14-point lead. Brighton turned the ball over on downs at the Athena 35 about midway through the third quarter.

Broken plays began to have good results for the Trojans, but there next touchdown was a good-looking, calculated pass play. Granison faked a hand-off and stood tall in the pass pocket with plenty of time. He made a 30-yard throw that dropped into the arms of Speed with 2:50 remaining in the third quarter.

Athena’s lead was 21 points over a Brighton team that preferred to run the ball. The Barons moved to within two scores after a 9-yard touchdown run by quarterback Shea McDonald with 11:01 remaining. McDonald finished with a team-high 156 rushing yards on 18 carries.

But Granison added his final touchdown run just over a minute later in game time after McDonald’s score. Granison finished with 232 rushing yards on 11 carries and completed 11-of-15 passes for 95 yards.

“I don’t have to do that every week, because I have a lot of talent around me, but if that’s what’s needed that’s what I’ve got to do.”

Brighton’s Andrew Zibuck catches a short pass over the middle.

Athena quarterback Ta’von Granison looks for running room out of the pocket.

Athena’s Thaj Avies (2) helps tip the ball away from Brighton’s Andrew Zibuck (22) with Kenny Speed coming up with an interception. 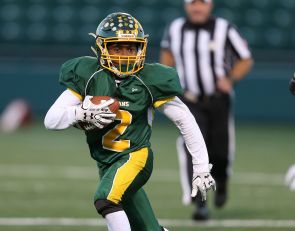 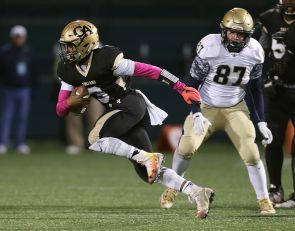 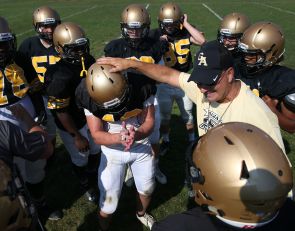 Granison again a big factor before leaving game with injury.