High school backs have put up monster numbers in 2016

High school backs have put up monster numbers in 2016

The record book has been under attack at several schools during this football season.

Big numbers have come up nearly every week on the offensive side of the ball.

Most of the sensational stats have come from running backs, so are we in a golden era of backfield beasts? Or is it something else?

“I have witnessed backs play great, but get very few yards,” Lakeview coach Matt Miller said. “But I have never witnessed a back get yards when we did not control the line of scrimmage.

“We have had a number of players have 200-yard games over the past few seasons, and one thing I know has happened in all of those games, the offensive line played great.”

Lakeview running back Jay’Vion Settles had a near-school record of 258 yards on 16 carries earlier this season.

If that’s the case, offensive lines throughout the area should be applauded for some of the huge nights offenses have had in high school football this season.

Just last Friday, a couple of players ran for more than 200 yards in a game.

In Lakeview’s 44-6 win over Loy Norrix, senior Jay’Vion Settles had a near-school record of 258 yards on 16 carries. On the same night, Marshall’s Brad Feasel had 257 yards in a 45-0 win over Jackson Northwest.

In both cases, the offensive coaching staff went with what was working to keep the ball moving down the field. And the result was a big night for their featured back who came close to setting a school record.

Marshall Brad Feasel had 257 yards in a 45-0 win over Jackson Northwest earlier this season.

“During that game, our offensive line was opening some nice holes and once Brad gets to the second level he has great ability to make people miss,” Marshall coach Jason Stealy said. “During a game like that, if something is working, we just want to keep feeding him the ball. Never once did the record come into my mind during the game, however. We just wanted to do whatever it takes to win the game.”

At Lakeview, there was the immediate thought Settles had broke the school record. However, after looking at the tape, it was found he came up just short of the 276 yards in a single game by Dre’On Kemp in 2014. Not that it would have been a goal to break the record in a one-sided game like that.

“I have never once thought about a school record during a game,” Miller said. “We do not keep track of things like that during the game. We are just trying to call the best play for our team to succeed. So I would never let a thought of a record dictate what is going on.”

In the Lakeview game, seemingly everything was going as three different backs carried the ball more than 10 times and the Spartans had 445 total yards. In both the Lakeview and the Marshall cases, it was a long touchdown run near the end of the game that put both Settles and Feasel over the 200-yard mark.

“Yeah, I told Brad he had one more play and then I was going to get some backups in the game and on that last play, he broke a long one for a TD,” Stealy said.

It wasn’t just an odd week during the regular season. There have been other crazy numbers that have popped up this year from the running back spot.

Adam Schantz at Climax-Scotts is averaging a whopping 16.0 yards per carry as he has already went over the 1,000-yard mark on the season with 1,088 for the state-ranked Panthers. His monster night this year came on the first week of the season when he had 327 yards on just 13 carries with four touchdowns in a win over Michigan Center.

Also, early in the year, Coldwater’s Sam DeMeester had 271 yards on 30 carries in the Cardinals’ 33-22 win over Jackson. Harper Creek also had a player go over 200 yards in a game earlier this year with junior Dawson Bartlett hitting for 227 yards on 21 carries in a victory over Parma Western.

Another city player that came close to taking down a historic school record was Carlos Parks as he had 285 yards on 14 carries in a Battle Creek Central win over Gull Lake. The 285 yards was short of the 312 yards rushed by Larry Caper II for the Bearcats in 2008.

In all of those cases, the  numbers become associated with the individual, but the big day is usually shared by the offensive line, as mentioned above, and really the entire team.

“Breaking a record, or coming close, is a team accomplishment,” Battle Creek Central coach Lorin Granger said. “Especially in the game of football. You can’t do anything positive in this game without your teammates. I know Carlos would say the same thing.”

But why is that, and should we expect even more fireworks in the final weeks of the regular season? 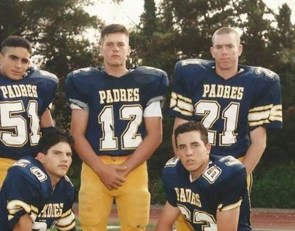 Is this the end for Tom Brady? Relive the legend's high school career

https://usatodayhss.com/2016/high-school-backs-have-put-up-monster-numbers-in-2016
High school backs have put up monster numbers in 2016
I found this story on USA TODAY High School Sports and wanted to share it with you: %link% For more high school stories, stats and videos, visit http://usatodayhss.com.