What to watch for — Barron Collier: This is a Region 6A-3 quarterfinal, the first round of the state playoffs. Senior QB Jake Bueltel, who has passed for 655 yards and six touchdowns with five interceptions, hasn’t played in four weeks because of a punctured lung that sidelined him. Coach Mark Jackson said he’s going back and forth as to whether to start him or Jacob Kuhlman, who has passed for 341 yards and three touchdowns with five interceptions in relief of Bueltel. “We’ll see who goes on Friday,” Jackson said. “Jacob’s a lacrosse player. He’s a tough-minded kid. He’s been managing the games well.” Junior RB Dana Brown has rushed 178 times for 922 yards and five  touchdowns. He would have had more but missed the first two games of the season because of an ankle injury. Fort Myers: The Green Wave and Cougars have two common opponents. Fort Myers defeated Lehigh 42-7, while Barron Collier lost to Lehigh 26-14. Fort Myers defeated North Fort Myers 37-16, while Barron Collier fell to the Red Knights 40-30. Fort Myers remains healthy but blew a 21-7 lead against Dunbar last week, losing 29-21 after surrendering 22 consecutive points in the game’s final five minutes. QB Ben Stobaugh leads the offense and has completed 36-of-69 passes for 639 yards and seven touchdowns with six interceptions. Senior RB Darrian Felix has rushed for 950 yards and 14 TDs on 113 carries. He has help from Xavier Perez and Sias Young, who have combined for 741 yards and 14  touchdowns. Look for the Green Wave to bounce back at home.

What to watch for — Lehigh: This is a Region 6A-3 quarterfinal. The Lightning are coming of a 42-2 win over rival Riverdale with RB Jalane Nelson carrying 20 times for 145 yards and a TD. Nelson will have to step in a similar way Friday with junior RB Chris Curry out with a leg injury. Naples has given up 22 points per game this season, which could provide the Lehigh offense with an opening. QB Delshawn Green completed 8-of-10 passes for 165 yards and may have to put the ball in the air 20 or more times against the Golden Eagles. Naples: The defending regional champion Eagles have had two weeks to prepare for Lehigh and that could spell trouble. Led by junior QB Jordan Persad-Tirone, who has accounted for over 1,500 yards through the air and on the ground, Naples hasn’t scored less than 30 points in a game this season. Senior RB Marcelino Charles leads the team in rushing with 892 yards and nine touchdowns in nine games.

What to watch for – Southeast: The District 5A-11 runner-ups are following a 42-24 loss to Manatee. While the Seminoles went 0-4 in non-conference games this season, they did go 4-1 in the division to lock up their second straight playoff bid. They have a new head coach in Rashad West, who was formerly with Island Coast for a month in the 2015 offseason before he resigned. The Seminoles have split their last four games, averaging 17 points in losses and just a shade over 24 points in wins. Junior quarterback Alex Taylor has passed for 1,877 yards and 15 touchdowns in nine games and completes 57 percent of his passes. The Seminoles have four receivers with over 250 yards receiving and two with nearly 500 yards and 40 catches. Dunbar: The Tigers, 29-21 winners over Fort Myers last week to finish the regular season, have won five straight games after a two-game slide in September and head into the Class 5A quarterfinals to face the Seminoles for the second straight season. A year ago, the District 5A-12 champion Tigers won this game 16-2. The Tigers have given up an average of 19 points in their last three games against Immokalee, Mariner and Fort Myers and in losses to Lely and South Fort Myers averaged 24 points against. However, the Tigers’ offense has made up the difference, averaging 37 points across its past five games. The team is averaging nearly 400 yards between its rushing and passing attack and has two rushers over 600 yards – Keanu Young (651) and Lajuan Preston (1,216) and four others over 100 yards. The defense has logged 49 sacks and leans on its production from defensive ends Rocky Jacques-Louis, Judas McKenzie and Bakari Jackson, who have combined for 37.

What to watch for — Verot: This is a Region 4A-2 semifinal. In a rematch of a first-round playoff meeting last year, the Vikings travel again to meet the Tigers, ranked No. 1 in 4A. Cocoa defeated Bishop Verot 49-12 on their way to a state semifinal appearance last season. The Tigers fell to eventual 4A champion Miami Booker T. Washington in the Final Four. This regional quarterfinal features two offenses that go about their business in different manners. Bishop Verot junior quarterback Corey Besse looks early and often for junior wideout Deven Thompkins as the duo has combined for nearly 1,000 yards through the air. Thompkins has 15 touchdown receptions on the season. Running back Joslyn Mira gives the Vikings balance on the ground as a reliable option to move the chains. Cocoa: The Tigers have multiple contributors for a potent offense, but USF commit Bruce Judson headlines the Cocoa attack. The senior has thrown 13 touchdown passes and only three interceptions for the season, and has six rushing touchdowns on the ground. Senior running backs Lasedrick King and Timmy Pratt have scored 17 touchdowns and run for nearly 1,300 yards splitting carries. Bishop Verot has a large mountain to climb as the Tigers have allowed seven points per game over their last five matchups, and will need to finish off drives with points to keep up with the mighty Tigers.

What to watch for — South: This is a Region 7A-3 quarterfinal. Another rematch of a postseason tilt last year that sees the Wolfpack travel to Venice take on the No. 3 ranked Indians. Venice scored 28 unanswered points in the second half to come back from a halftime deficit to win 35-14 on the road last season. Interim head coach Matt Holderfield has led a talented roster to a season highlighted by a 42-35 triumph at Naples but lost out on a district title by losing to Gulf Coast 14-6. Playmakers across the board include Maurice Flournoy (QB/CB), E’Quan Dorris (RB), Riley Ware (RB/S), and Jeshaun Jones (WR/S). Dorris hit 1,000 yards for the year in the season finale and can be a force if he gets room to operate. Venice: The Indians are led by the aptly named Matt “Speedy” LaRoche, who has racked up 2,075 yards and 28 touchdowns. The senior had a notable 342 yards and five touchdowns in a victory over Braden River earlier in the season. Junior quarterback Bryce Carpenter is a capable playmaker and has tossed 11 touchdowns against three interceptions for the season. Wrapping up on LaRoche will be key for a Wolfpack defense that has had to negotiate their share of close games throughout the season. 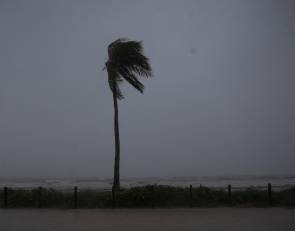