Those who saw him Friday night likely would agree.

The Clemson recruit and IndyStar Mr. Football candidate showed again and again why he’s one of the best quarterbacks in the nation. The 6-3, 200-pound senior threw for five touchdowns and 302 yards to lead the Bulldogs to a 38-25 win over Zionsville.

Johnson, who finished 23-of-33 passing with no interceptions, threw for touchdowns on Brownsburg’s first three drives of the game.

Johnson’s three TD passes in the first half — along with a 36-yard field goal from Devon Steinman — gave the Bulldogs a comfortable 24-10 halftime lead.

And the game plan the Eagles came up with at halftime still wasn’t good enough to contain Johnson or the Bulldogs’ offense. On Brownsburg’s third play of the second half, Johnson hooked up with senior receiver Daniel Breslin on a 36-yard touchdown pass to push the lead to 31-12 with 10:47 to play in the third quarter.

Despite that, Zionsville hung tough until the end. The Eagles cut the lead to 38-25 with 10:57 remaining in the game on a five-yard touchdown run by Brenden Mikesell.

But Zionsville just missed cutting the lead to one possession when its receiver was called out in the back of the end zone on a close call. The Eagles also committed a critical personal foul penalty in the fourth quarter that gave Brownsburg a first down.

“They’re well-coached, and their quarterback is incredible,” Zionsville coach Pat Echeverria said. “We battled to the end, but we have to keep from inflicting ourselves. We had a chance but made a silly penalty. It was a huge turning point.”

Echeverria said his plan was to stop the Brownsburg’s run game and limit Johnson’s big plays.

“We made some plays in the passing game,” he said. “But against a quarterback like that, he’s going to make some plays against you.”

“I think we were really crisp until the second half,” Hart said. “Their schemes are so good. Their kids executed, and I applaud them for that. We didn’t play great defense.” 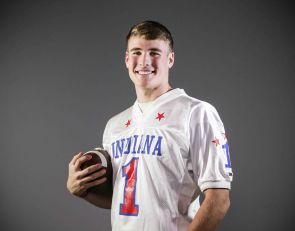 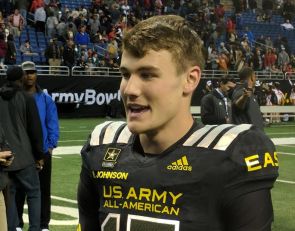 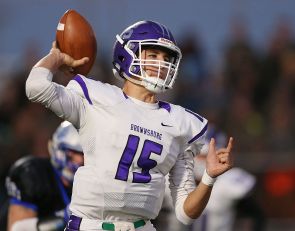 https://usatodayhss.com/2016/hs-football-hunter-johnson-tosses-5-tds-to-lead-brownsburg-past-zionsville-2
HS football: Hunter Johnson tosses 5 TDs to lead Brownsburg past Zionsville
I found this story on USA TODAY High School Sports and wanted to share it with you: %link% For more high school stories, stats and videos, visit http://usatodayhss.com.