From many, there will be one. And while there’s still no guarantee contending athletes will win their own state at this point in the season, a number of elite performers are making a case for Gatorade National Boys Basketball Player of the Year consideration. Here’s the scoop on the latest top candidate.

Greatness Present: Monk is one of the most explosive scorers in Arkansas history and one of the scariest dunk artists in the country, but he’s going to have to go a level higher to accomplish his last prep goal: deliver Bentonville the program’s first state basketball title in school history.

MORE: Malik Monk all set to suit up in the Jordan Brand Classic

Monk poured in 41 points Friday, but his Tigers lost out on a share of a conference title with a 78-76 overtime loss to Fayetteville.

Earlier in the season, the 6-foot-4 shooting guard had 30 points, eight assists and six rebounds against the same Bulldogs team, but again came up short, 60-55.

Ranked as the No. 6 recruit in the Class of 2016 by both Scout and Rivals, Monk needs to find a way to get past Fayetteville—the top seed in the Class 7A state tournament and a likely foe if Bentonville reaches the state championship game from the other half of the bracket.

The season highlight may have been his 53-point explosion against Arlington (Tenn.), which included a 40-point second half (and a 22-point third quarter).

Monk, who has scored 30 or more points in 11 games this season, has been selected to play in both the McDonald’s All-American Game and the Jordan Brand Classic.

Bentonville has a first-round bye and will play the West Memphis/Har-Ber winner in a Class 7A quarterfinal on March 3.

Greatness Past: MVP of the Nike Global Challenge in July, Monk scored 26.6 points per game as a junior, lifting Bentonville into the state final for the first time in school history.

Greatness Future: Monk committed to the University of Kentucky in November, much to the chagrin of home-state Razorback fans.

Make no mistake: The Gatorade State Boys Basketball Player of the Year races aren’t over, and the National POY race is now heating up. Time remains for one standout student-athlete among thousands to rise to the top of our list. Check back for weekly updates on the top contenders making a case. 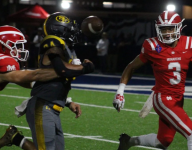