Met Open champion Mark Brown waits to tee off Wednesday at the 17th hole at Glen Oaks with caddie Josh Rackley. The Tam O’Shanter head pro also won the Met Open in 1999 and 2013.

OLD WESTBURY – Wisdom had very little to do with Mark Brown capturing a third Met Open championship a mere three weeks before his 50th birthday.

It was simply the result of really impressive golf.

The longtime Tam O’Shanter head professional outplayed a prodigy, closing with a 68 Wednesday at Glen Oaks Club to finish with a 4-under total of 206. Brown came in four shots ahead of Sleepy Hollow amateur Cameron Young, whose final-round charge lost steam with a pair of late bogeys.

It was practically a walk in the park.

“There’s not one shot this week I want to take back,” said Brown, who collected $27,500. “It was fun. There wasn’t a whole lot of stress for three days out there.”

Young was playing very well ahead of the wire-to-wire leader and was able to apply some momentary pressure.

The sophomore at Wake Forest was 4-under on the day and within a shot with six holes to play. The gap was two strokes when he suffered bogeys on the 16th and 17th holes.

Despite three bogeys on the back side, he closed with a 67.

“I was doing the same things I’ve been doing,” Young said. “It seemed like everything’s been coming together so it was nice to have it happen in the final round. I at least had a chance coming down the stretch, and that’s all you can ask for is to be within a couple of shots with nine holes to play.

“I hit a 9-iron into the 16th, unfortunately. I tried to hit a low one and it squirted right on me off the upslope. It was unfortunate that I got all the way to the bottom of that bunker. It would have been easy on the upslope. Then on the 17th I had a little bit of a pull. It landed on the fringe and trickled down into the water.”

Sleepy Hollow amateur Cameron Young reacts upon seeing his ball roll off the bank and into the water on the par-3 17th hole in the final round of the Met Open Championship on Wednesday at Glen Oaks. The sophomore at Wake Forest wound up second.

Mike Miller also made a run.

The 24-year-old Mackenzie Tour player from Brewster came in off a top-10 finish in Ottawa and opened with a 77. He got back into contention with a pair of 68s to finish tied for third with Peter Ball of Old Oaks.

“I got off to a good start, birdied the first couple of holes and had really good chances on the first seven,” Miller said. “And then I had a bad swing on No. 9, which slowed me down. I got it going again and was 4-under on the day through 16. If you hit to the middle of the green or the right side, the worst you’re going to make is 4. I wanted that second-place check and went flag-hunting. I pulled the ball just a little, caught the bank and went into the water, but I’m really satisfied with the week.

“I shot a 77 to start and still had, not a good chance to win, but a chance to win. Two rounds in the 60s around here is pretty good. I might have been a little shot after playing in Canada and flying in, but all in all it was so cool to be home.”

Mike Miller tees off on the 10th hole Wednesday during the final round of the Met Open.

At the Glen Oaks Club 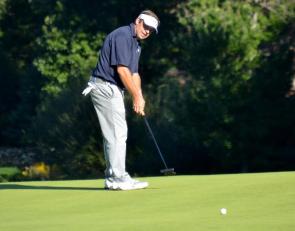 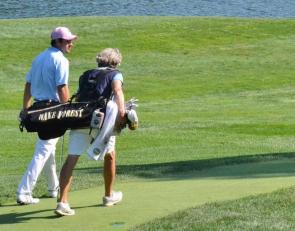 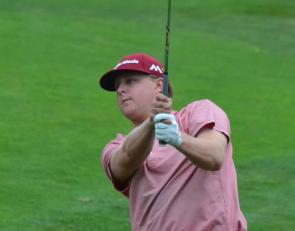