It was early in the 2013 Detroit Public School League championship game at Ford Field when Cass Tech quarterback Jayru Campbell dropped back and threw a short under screen pass to a receiver.

The receiver caught the ball in stride and turned on the jets, sprinting 80 yards — untouched — for a touchdown.

People scrambled through the program to find the name of the talented, but unknown receiver. As their eyes scanned across his name, past his height and weight, they were shocked to see that the youngster was only a freshman.

That was our introduction to Donovan Peoples-Jones, who has become the No. 1 player in the state and a member of USA Today’s preseason All-America team.

Peoples-Jones, who is currently nursing a hamstring injury, is the state’s lone 5-star recruit and when you combine his speed, size — 6-feet-2, 202 pounds — and catching ability, you see why virtually every top program in the country is after him.

His first college offer came from Ohio State in his freshman year and it has been non-stop since, especially after he caught 69 passes for 1,168 yards and 18 touchdowns last fall.

He seems a bit overwhelmed by it all and is considering Michigan State and Michigan along with a host of other schools that changes on a weekly basis.

“I had 10 schools, but it kind of changed around so I’m not even sure,” said Peoples-Jones. “I don’t even want to say.”

Whichever school lands the Cass Tech star, it will be getting much more than just one of the nation’s top football players.

It will be getting a genuine student-athlete who has hopes and dreams that go well beyond playing football for as long as possible.

Peoples-Jones carries a 3.9 grade point average at Cass Tech, one of Detroit best academic schools, and earned 1,200 on the SAT.

He is the rare youngster who could earn a college scholarship either academically or athletically.

That was the plan set in motion years ago by his parents — Roz Peoples, a Cass graduate who has an MBA in finance and is a government contracts manager for Verizon, and Dr. Eddie Jones, another Cass grad who is an orthopedic surgeon in suburban Chicago.

Donovan Peoples-Jones catches a long pass in stride and scores in a game against Oak Park at Wayne State in Detroit in 2014.

“It’s from what my mother and father instilled in me at a young age, to always study,” Peoples-Jones said. “My mom, still up to this day, helps me study. When I was younger she made it fun. I always kind of looked forward to it. Me and her would compete. If we were doing flashcards she would help me learn them. She would learn them right with me and we’d see who got the most right.”

Years ago Peoples-Jones won some and his mother won some, and the youngster believes maybe his mother threw a few of their matches to let him win.

But those days are over.

“She probably let me win until the subjects got harder like calculus and that stuff,” he said. “I’m winning now.”

Peoples-Jones attended Montessori school in his early years and his mother adopted that method of teaching when working with her only child.

It was apparent at an early age that Peoples-Jones was a superior athlete, but he also showed an aptitude to do well in school, which was vitally important to his parents.

“To me education is more important than sports because you’ll be lucky to get five or 10 years out of football,” said his father. “A lot of the athletes you see are completely lost in life after sports and start circling the drain. So it’s really important to do something after your sporting years.”

Peoples-Jones knows exactly what he wants to do when he is finished with football. He wants to follow in his father’s footsteps and become an orthopedic surgeon.

“I’ve dealt with a lot of football injuries and I think I’ll play the part well,” he said. “I know a little something about it. I’ve been around a lot of injuries and I’d love to do something that I love and stick with the sport I love.”

Of course, before you can become an orthopedic surgeon you have to be admitted to medical school, which can be almost as difficult as making an NFL roster.

But Peoples-Jones may have an edge on a lot of students because he competes in the classroom with as much intensity as he competes on the football field.

“I like the feeling of knowing that you’re at the top of the class,” he said. “When the teacher gives back tests and they say it’s highest to lowest and you know you’re one of the highest. Just the confidence you get when you’re filling out a test and you say: ‘Oh, this is that’ and ‘Oh, this is that,’ I like that. It’s a good feeling. It’s better than being: ‘Let’s try this.’ “

Donovan Peoples-Jones runs by Detroit King’s Jalen Embry for a TD in a 2013 game at Ford Field in Detroit.

Dr. Jones has a trampoline is his backyard and he got his son to the point that he could do a flip and catch a football on the way down.

“He started to be able to do that so I really wasn’t as amazed as I could have been with what he’s doing in football,” said his father. “I was a lot more amazed to see him dunk over three guys. I never knew he had those skills, but I did know that he’s got some gravity-defying skills at wide receiver.”

Cass quarterback Rodney Hall began playing with Peoples-Jones in youth leagues, long before they entered Cass Tech. He said it is comforting having him as a receiver because he can bail him out of tough situations.

“His ability to catch the ball sets him apart from everybody,” Hall said. “Everybody has speed, but the way he catches the ball, it’s crazy. When I’m in doubt I know I can throw the ball and if he doesn’t catch the ball I know nobody else is going to catch it.”

Cass coach Thomas Wilcher wasn’t surprised to see Peoples-Jones score on that 80-yard touchdown in the PSL title game as a freshman and he isn’t surprised now that he has developed into an All-America player.

“He’s gotten better and better every year,” Wilcher said. “He works hard and he looks forward to getting better so it’s a great thing. The most important thing I see this year is he’s bigger, stronger and he’s faster and understands the game a lot more.”

Being able to run faster and jump higher than anyone else on the field is good, but Hall knows there is more to Peoples-Jones than just natural athletic ability.

“What makes him so good is his will to compete,” Hall said. “People assume he’s not a competitor because he’s a quiet kid. He doesn’t really talk much unless you know him for real. He really, really wants to win.”

Peoples-Jones is quiet and understated. He doesn’t go through gyrations after catching a pass for a first down and he doesn’t act like he discovered the cure for cancer after scoring a touchdown.

“I don’t really talk a lot; I wasn’t raised that way,” he said. “My dad wanted me to kind of emulate Barry Sanders. Even plays on the field — making a great play — just coming back with a high five, but not really talking much about it, not doing all the dances, extra things that will take attention away from the team and the goal.”

He also wants to emulate his father and perhaps it is because he is such a serious student that he is planning on a career in medicine. He understands the reality of having choices in life.

“I always wanted to play in the NFL before I wanted to be a doctor,” he said. “Then I was thinking more realistically, what if this doesn’t work? My second love would be being a doctor and helping people who can’t help themselves.”

That is why his father gave him an anatomy book and why he does more than just bounce on a trampoline when he is with his dad.

He has accompanied his father into the operating room on several occasions and has seen exactly what he may be doing some day.

“That’s what I do and he’s been right there the whole time and he’s seen the lifestyle,” said Dr. Jones. “It’s a fun way to practice medicine. I’ve always emphasized life after football. You can end up with a lot of money, but a lot of money and nothing to do, and you’re still relatively a young man, is a recipe for disaster.”

But none of this would be possible if Peoples-Jones didn’t buy into his parents’ credo that education comes first.

“Education was always important in our home,” said his mother. “He grew up knowing that, he grew up valuing education. He grew up understanding how education can change your life. There was no question what he was going to do after high school, because he was going to college somewhere. I wanted it to be fun so he would enjoy learning, enjoy this journey and want to give back and do something positive with his life.”

While People-Jones has the inner-drive to succeed in school, it was aided by some rewards. Bringing home a good report card proved to be bonanza for the youngster.

“My aunties would give me money for each ‘A,’” he said. “For each ‘A’ that I got they’d give me $10 so if I got seven ‘As’ that’s $70 for the report card. My mom told me when I was younger that if I got a scholarship to college she would give me whatever car I wanted. That’s probably the biggest one.”

That is why even though he hasn’t signed a national letter of intent Peoples-Jones has been driving a Jeep since last November.

But while the rewards were nice, he didn’t need the additional motivation to earn good grades.

Long ago he figured out the secret to being good in the classroom and on the football field.

Who: Senior wide receiver/defensive back

Overview: He has been the top-ranked player in this class since he entered Cass Tech and is rated one of the top receivers nationally. He caught 69 passes for 1,168 yards and 18 TDs as a junior. He has outstanding speed to go with good size. 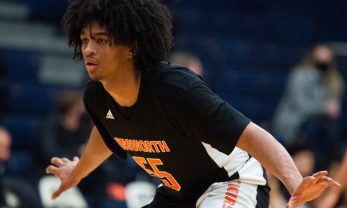 https://usatodayhss.com/2016/mccabes-top-25-players-no-1-donovan-peoplesjones
McCabe’s top 25 players: No. 1 Donovan Peoples-Jones
I found this story on USA TODAY High School Sports and wanted to share it with you: %link% For more high school stories, stats and videos, visit http://usatodayhss.com.