No. 3 Montverde's depth too much for Roman Catholic at Hoophall Classic

No. 3 Montverde's depth too much for Roman Catholic at Hoophall Classic

No. 3 Montverde Academy (Montverde, Fla.) is 17-1 to start the season. (Photo: Montverde Basketball).

SPRINGFIELD, Mass. — A year ago, Sean Mobley and Devonta Jordan were playing in the 3A state playoffs for Florida Air Academy (Melbourne, Fla.). On Sunday, they were key players in No. 3 Montverde (Fla.) Academy’s 74-44 defeat of Roman Catholic (Philadelphia) at the Spalding Hoophall Classic.

Jordan, a junior guard, had 13 points and five rebounds and made all six of his shot attempts. Mobley, a senior forward, had 10 points and seven rebounds.

“Coach (Goporo) had encouraged me to go there,” Jordan said. “When he was fired, I felt the new coach didn’t have the same connections, so I took a chance and came here (to Montverde). It was a big change we had to overcome and deal with to get to where we want to go,” Jordan said.

With so much talent on Montverde, it’s hard for either player to get huge minutes, but Jordan said playing against elite players every day has helped his game.

“It helped me develop my handle every day in practice, so it’s a good experience,” Jordan said. “My college prospects are a little better. I want to go out of state.”

The Eagles (17-1), were led by sophomore big man Simi Shittu, who had 15 points and five assists. Roman Catholic, which was in the Super 25 up until two weeks ago, has lost three of its past five games. The Cahillites (10-4) were led by junior guard D’Andre Vilmar with 16 points. 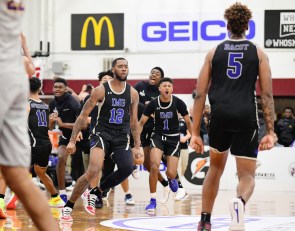 Hoophall Classic: What We Learned

https://usatodayhss.com/2016/montverdes-depth-too-much-for-roman-catholic
No. 3 Montverde's depth too much for Roman Catholic at Hoophall Classic
I found this story on USA TODAY High School Sports and wanted to share it with you: %link% For more high school stories, stats and videos, visit http://usatodayhss.com.