West Florida’s Haile Bell throws the ball to first base Wednesday night during the Region 1-6A quarterfinal game at West Florida High School. West Florida third baseman Haile Bell prepares to catch the ball and try to tag out the Mosley runner Wednesday night during the Region 1-6A quarterfinal game at West Florida High School.

After consoling players, then gathering together for the one last cheer, Jessica Smith held back her own emotions with a smile.

So many memories flashed. So many moments to cherish. In what became Smith’s final game as the West Florida High softball coach, the Jaguars were unable to dent Mosley’s combination of solid pitching and defense in a 3-1 loss Wednesday in their Region 1-6A quarterfinal playoff game.

“It kind of hit me like a brick wall when we did the National Anthem,” said Smith, who decided midway through this season she would end her coaching career. She has been at West Florida High the past eight years, including the last five as head coach.

Milton tops Tate in 1st round of playoffs

Smith, a 1996 Pensacola High grad, who is moving to Nashville next month to begin a new job outside of coaching, led the Jaguars to their greatest feat. Last Friday night, West Florida (12-15) won the District 1-6A title in a 4-0 win against Gulf Breeze.

It was the Jaguars third district title in three different classifications (4A, 5A, 6A) in Smith’s five years. The most unforgettable achievement was the 2014 state championship with an incredible final-inning comeback against Gainesville’s P.K. Yonge.

“It’s special to know everybody contributed,” said Smith, a two-sport athlete at Northwest Florida State College, who then graduated from Alabama-Birmingham. “Every team, every coach. every player contributed to everything we have been successful on here.

“The girls came together at the right time and they have made coaching here easy.”

Smith knew Wednesday’s game against visiting Mosley (16-8), located near Panama City, was going to be difficult. The Dolphins’ senior pitcher Laney Haynes had recorded all of her team’s wins.

In the first inning last night, Haynes was part of Mosley’s three-run start.

She had the only hit of the rally, after leadoff batter Kaylee Howell reached on an error. After a sacrifice bunt to move the runners, Mosley got its runs on a fielder’s choice play, a sacrifice fly by Caroline Kreel, and a double steal that Haynes factored in.

“She’s easy to pitch behind, play behind. She’s a great hitter, she’s a great leader,” said Mosley’s second-year coach Natalie Pearson. “She always gets the job done. It’s not just out here. She is a great person all around.

“I told them a million times, put the ball in play and make things happen. And that’s what they did.”

The Jaguars had two runners on in the bottom of the first with one out, Haynes got out of the inning, ending it with a strikeout.

West Florida had runners on base in every inning except the seventh when Haynes retired the Jaguars in order to end the game.

The Jaguars lone run occurred in the fifth when loading the bases and scoring on Morgan Freeman’s RBI single. But they also left the bases loaded.

“When give up three runs to start the game, it kinda puts you down a little bit,” Smith said. “You cannot leave the bases loaded with one out and not capitalize.

“You leave eight nine runners on and you only score one run, it’s just not good odds. We had plenty of opportunities. we just couldn’t convert.”

West Florida pitcher Farrah Nicholas kept the Jaguars in the game with her own outstanding effort on the mound. She gave up only three hits, struck out six, allowed just one walk and few base runners past the first.

“Her last three games she was outstanding,” Smith said. “She threw the best three games of her career. It’s just too bad we couldn’t back her up on defense or offense. She pitched her heart out. She left it all the field.”

It was a fitting performance for Smith in her final game. She’s tried to give West Florida all she’s had in the past five years. 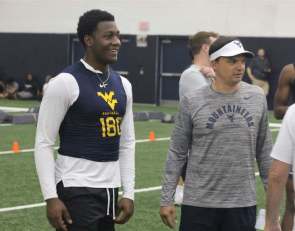 https://usatodayhss.com/2016/mosley-beats-west-florida-31-in-region-16a-quarterfinal
Mosley beats West Florida 3-1 in Region 1-6A quarterfinal
I found this story on USA TODAY High School Sports and wanted to share it with you: %link% For more high school stories, stats and videos, visit http://usatodayhss.com.